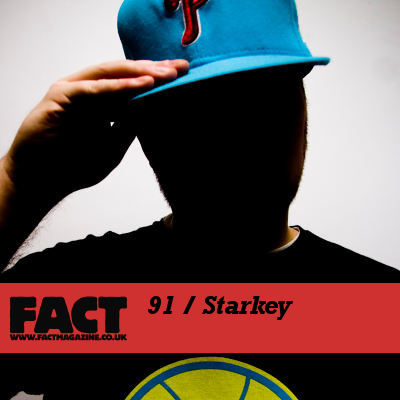 More influenced by grime than its more popular cousin, dubstep, Starkey’s made a name for himself with some of this decade’s most dynamic, overblown dance music: bass-heavy club tracks that are rhythmically all over the place, constantly changing direction, with dramatic key changes and leadlines that sear higher than the stars before imploding like dying stars.

Starkey has one of the biggest sounds around – and not in a cheap, tearout dubstep sense – his tracks carry tons of physical and emotional weight; tracks like ‘Miracles’ and ‘Crippling’ some of the most beautiful tracks produced by this anything goes, post-garage music. For a full interview with him, check the second page of this article.

“It’s a snapshot of where I’m at right now I think… with some tunesI’m feeling from others. Some of it may not necessarily be dancefloor,but work in a recorded mix.

“Well as you’ll hear in the mix, we’ve now got teleportation thanks to one of the bots.

“Other than that… things are alright man. Keeping busy.”

“It’s a snapshot of where I’m at right now I think… with some tunes I’m feeling from others. Some of it may not necessarily be dancefloor, but work in a recorded mix.  It’s nice to be able to mix some of that stuff in this kind of setting.”

What projects have you got in the pipeline right now?

“Well I’m putting the finishing touches on my 2nd album for Planet Mu. It will be out early next year…with a single dropping in December. The first single will be a tune featuring Badness called ‘OK Luv’. Before that, on November 16, I’ll be dropping another 12″ on Mu that will be part of the Serato Pressings Series, which is my track ‘Knob Twiddler’ on the a-side and serato tone on the flip.”

“There’s also another 12” for Rwina coming out soon…. ‘Rain City’ and ‘Beatingz’.

“I’m also finishing up putting together Street Bass Anthems Vol. 4 for me and Dev79’s label, Seclusiasis. The 12″ is out at the end of this month with the mix CD to follow soon after. We’ve got tunes from all sorts of people on there…Slugabed, BD1982, Stagga, DNAEBEATS, plus too much other stuff to mention right now. It’s gonna be good. I’ve got a few official remixes coming out as well, including one for Playdoe on Rwina, The Brown Acid and Kano’s new single ‘Rock n Roller’.”

We’ve heard some really exciting stuff about the material for your next album – how will it differ from Ephemeral Exhibits?

“I’d have to say the main thing is that the album was completely written with an “album” in mind. Exhibits was kind of put together from songs I was working on when I signed with Mu. However, this one was written from scratch.

“I’m really happy with the direction this album is taking. It just feels like the logical next step or progression from the first one. Lots of original vocals as well…which you know I love.”

“I’m really happy with the direction this album is taking. It justfeels like the logical next step or progression from the first one.Lots of original vocals as well…which you know I love.”

Any collaborations lined up?

“Yeah…I can tell you about the ones that are sort of done.  But I really don’t know what the final tracklist is going to look like to be honest.  There’s like 22 songs in the works…and probably only room for 15 on the cd.  However, some of the stuff may end up on the digital release cuz that’s the beauty of digital…you don’t have that 80 minute max.

“Besides the first single featuring Badness, I’ve got a song with Cerebral Vortex and Buddy Leezle called ‘Club Games’.  I also do some vocals on that one as well.  Vortex also vocalled my tune ‘Murderous Words’, which was on the Starkbass LoDubs CD.

“There’s a song called ‘New Cities’ which I’ve done with Kiki Hitomi, as well as another one with another female vocalist, Anneka, called ‘Stars’. Eligh from Living Legends also has a tune that he’s working on…as well as P Money and a few others…so we’ll see what comes in this month.”

Are you still running parties out there in Philly? How have they changed over the years? What sort of stuff goes off the most there?

“I personally don’t have any regular parties in Philly, but Sonkin, Dev79, Ghost and others in Seclusiasis are holding it down with some regular events.  That’s not to say that I don’t ever play…I do. It’s just my schedule has been so hectic these past few months, and I haven’t been a resident at anything.

“Musically, obviously this whole “bass” music thing, as it’s referred to a lot in the States, has been taking off.  Crowds are getting bigger.  They are up for more variety in the music.  It’s refreshing.”

Are the crowds receptive to all sorts of stuff that loosely fits in the grime/dubstep/bassline spectrum? Or do you have to keep quite tight to that Street Bass sound you’ve established to make sure the crowd’s moving?

“Yeah I’d say so. In Philly in particular though, they’re more up for the vocal stuff.  Philly is a hiphop town…so the vocals really are a large part of what we do at our nights.”

What current producers/DJs are you really into right now?

“Oh man… there’s so many.  Here’s just a few off the top of my head…of course all the Seclusiasis and Trouble & Bass folks. Then there’s…Slugabed, Eprom, Joker, Gemmy, DZ, Raffertie, DNAEBEATS, Lazer Sword…there’s so many.  There’s a lot of great music going on right now…you just have to sift through a lot of the nonsense, or just not pay attention to it. There’s all these sub-movements… people doing their own thing. Like, what is Bok Bok or L-Vis1990 on…or Shortstuff?? Wot U Call It…for real?  It’s just interesting music. That’s exciting.”

What else should we know?