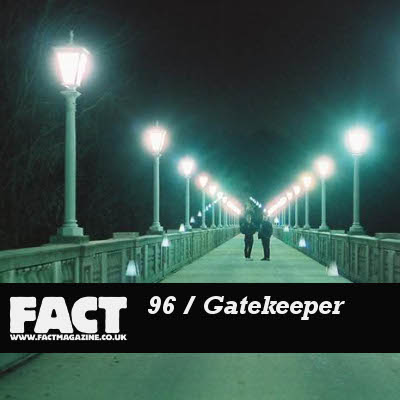 Definite treat rather than a trick this one; FACT’s Halloween mix comes courtesy of Chicago’s foremost purveyors of shlock-heavy slasher disco and the first signings to Kompakt boss Michael Mayer’s new label, Gatekeeper.

Not to be confused with the floppy haired dubstepper of the same name, Gatekeeper deal in “psycho killer symphonies for the back alley discos of the macabre”, inspired by the sound of their hometown as well as the soundtrack work of John Carpenter, Goblin and Claudio Simonetti.

Their Optimus Maximus EP is out now on Fright (that’s Mayer’s new label), and if you ask us is pretty fucking great. As is their FACT mix, which features Depeche Mode, Dopplereffekt and plenty of “ridiculous sound effects from horror movies”.

For a full FACT interview with the pair and track list, hit up page two.

Squandra Blanco – Night of the Illuminati

Hey Gatekeeper – tell us about the mix you’ve done for FACT.

“This mix is, of course, for Halloween. It’s kind of all over the place, a lot of early industrial & EBM, movie soundtracks/samples and even disco towards the end. Neither of us are proper DJs so we definitely rely on ridiculous sound effects from horror movies to blend tracks together. Lots of satanic narration, thunder and werewolf effects, vocoded demonic choir, etc.”

How did you meet?

“We met in Chicago while we were both in undergrad. As longtime electronic music enthusiasts, we became friends, and a few years later started working on Gatekeeper.”

How would you describe your sound?

Were you both making this slasher disco type stuff then, or were you making other music?

“The ‘slasher disco’ sound was something that grew out of a shared interest in soundtrack music and late 70s and 80s kitsch horror imagery. It was a natural fit with our developing industrial and dark new age style.”

How did you hook up with Michael Mayer and Fright?

“Jon Berry (1/2 of the Fright brain) contacted us through the web. We were of course eager to work with him as longtime Kompakt fans and the ‘fright’ project sounded like a perfect fit for us. There is literally no better label for what we are doing.”

Both of you – favourite John Carpenter film?

What do you have in the pipeline for the future?

“We’re about to go into the studio to start working on our first full length so no shows for a while. Once we finish the album we’d like to tour a little, play some shows outside of Chicago.”

What’s the best Halloween you ever had?

“We usually just head over to Haddonfield. Its pretty close to Chicago…”