Aficionados just want to ogle the equipment, but even those who think electronic musicians do nothing more than punch a few commands into Ableton will be persuaded otherwise by the sight of Danny Wolfers, aka Legowelt, surrounded by a dozen haphazardly arranged synthesizers (see above). Langlade’s photographs are intimate, showing us the inane details of these musicians’ lives, while at the same time maintaining an impenetrable distance. We may know what’s in their houses, the pictures seems to say, but not what’s in their hearts.

What’s in their homes and studios, though, is interesting enough. Dramatically lit and uncomfortably posed, the photographs underscore the differences between the artists, and the similarities: stern, expressionless faces, miles of electrical cords, meticulously assembled record collections and equipment crowded into basements, attics and parents’ spare bedrooms.

The portraits in the series – ten of which are showcased over the following pages – document thirty members of Holland’s the close-knit world of electronic music on Holland’s west coast. From its roots in early illegal acid squat parties to its current incarnation as the epicentre of Europe’s electro-disco scene and Italo revival, Holland has long been a hotbed of groundbreaking synthesizer music and home to numerous ahead-of-the-curve record labels, including Bunker, Viewlexx, Crème Organization, Murder Capital, Strange Life, Clone, Frustrated Funk and Moustache Records. Langlade’s series of photographs, which is still in progress, captures the major players in Rotterdam and The Hague at home in their studios.\

Langlade, 28, was born in Paris and studied photography in school before opening a photo agency in Toulouse that specialized in architectural, commercial and wedding photography. On a trip to Rotterdam for an Intergalactic FM party, Langlade decided to bring an enormous camera with a vague idea of taking pictures of Dutch architecture, and ended up capturing the leading figures of the west coast Holland music scene – including Alden Tyrell, Legowelt, Orgue Electronique and Rude66. He later expanded the series, getting shots of I-f, Rude66, David Vunk, Mark du Mosch, Loud-E, Serge, Unit Moebius, Mark du Mosch, TLR, Pametex, Mr. Pauli and DJ Overdose, among others.

“Taking someone in his work environment, in this case a pretty intimate place,” Langlade said “tells, with small details, some part of the personality of the artists.” On an individual level, it’s these details in the portraits that make each one interesting. Guy Tavares’ drum kit, one of the few “traditional” musical instruments seen in the series, the strand of hair falling across Unit Moebius’s face along with the rubber chicken he curiously displays, Legowelt’s patterned sweater, Mr. Pauli’s 808 figurine that appears to have been re-appropriated from a former life as a house number plaque, the hint of a smile on Robert Auser’s face and what appears to be the pink Casio keyboard I had when I was nine perched in the background of Shitcluster’s sinisterly-bedecked space.

Alden Tyrell’s studio looks like a grim ’70s rec room: low ceilings, tatty black and brown carpet and the only window almost entirely covered, in the interest of better acoustics. Tyrell, clad in a beanie, sits in his chair, with synthesizers covering every surface; the only perceptible colour is coming from his red socks and bulky blue Nikes. “My place is as boring as it looks,” Tyrell (real name Martijn Hoogendijk) says. “I don’t like my house. I want to move.”

Possibly because the subjects are so stiff, the photographs give the feeling of old-fashioned portraiture. But it is not just the staging that give them a dated appearance. In many of the pictures, it is only the conspicuousness of the laptops that give them away as being from today’s world and not that of 1984. The majority of the synthesizers and drum machines are from the ’80s: Korg Mono/Poly, Korg Poly 800, Roland Juno 60, Sequential Prophet 600, Roland TR808, Roland Jupiter 4, Commodore Amiga 1200, Clavia G2X, Jen SX1000 and Moog Minimoog among others.

Most of the artists involved in the series say they prefer the sound produced from vintage analogue synthesizers, which is apparent from the dozens and dozens of them that appear in the pictures. “Vintage synths are more desirable with guys because they are typical ‘man-toys’ like cars and guns,” said Danny Wolfers, himself an owner of several dozen vintage synths. “They give a shallow mental fulfillment and most important: prestige with other synth collectors. When you get older you realise that you are just stuck with a room crammed with electronic junk full with dangerous heavy metals.”

But the photos of these rooms, as crammed as they are with vintage electronic “junk” are evocative of a feeling that in some ways, these men are crystallized in a bygone era, when all a guy needed to get by was a couple of drum machines, a few synths and a collection of Kraftwerk records stuck up on the walls.

By capturing so much of their environment, Langlade has been able to show the world something beautiful about a group that isn’t usually called out for its looks. Seen collectively, the series presents an incredible picture of solitariness. With just a few exceptions, the series is a group of men alone with their machines and equipment, seemingly perfectly content to have it that way. One gets the sense that these men have given up a lot to create music, and that there are a more than a few women out there who wish, just for once, that they’d come out of the basement and have dinner. 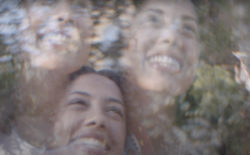 Jayda G shares video for sunny house anthem, ‘Both Of Us’