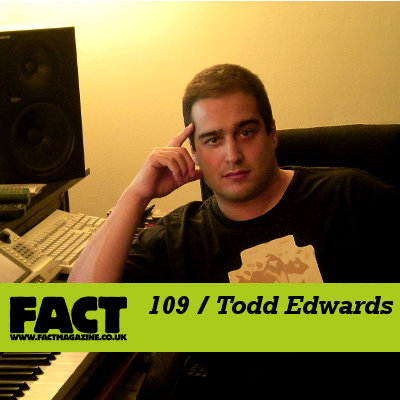 Since starting the FACT podcast series, we’ve been lucky enough to feature contributions from some of our very favourite artists. Few have made us as proud as Todd Edwards.

Nicknamed “The God”, Edwards is best known for ‘Face to Face’, his collaboration with Daft Punk that featured on the French duo’s seminal Discovery album. But in underground dance music circles the New Jersey resident’s influence spreads far beyond that: his unique vocal reconstruction technique – where he cuts and pastes individual syllables to create a poetic collage that often only unravels after various listens (think a dancefloor-focused version of what Burial does) – is one of the most recognizable trademarks in his history of house and garage music, usually backed with some of the most sunblind four-by-four beats in history.

Todd’s gone all out for his FACT mix: an hour in length, it features both new unreleased cuts and “unheard tracks from the archives”, and is essential listening for both those interested in his legacy on house and garage music and fans of his overground admirers – both Klaxons and Justice have asked Todd to remix them in the past. For the tracklist and an interview with Todd, turn to page two. FACT’s Guide to the Essential Todd Edwards is also worth a peek.

You’ve always been primarily a producer rather than DJ, but between this and the recent Treehouse mix you did, are you starting to get back into the DJ game more?

“I most definitely am looking to DJ as much as possible. Over the last few years, I found my place in DJing. I enjoy connecting to my audience, whether it’s a large or small venue. I’m looking to integrate, some visuals, and keyboard playing within the set…but one step at a time.”

There’s a noticeable reworking of ‘Face to Face’ in here–is that a remix or a newly recorded track? And what prompted you to revisit it?

“To be honest I should have done a remix to ‘Face To Face’ when it first came out.  I actually did that remix in 2003, but I only played it in the UK. However, with  internet mixes, you will be hearing a lot of new music, that may not even be new, just unreleased. People are always looking for something they don’t have, and  I have  a lot  that I can provide them with.”

‘Burning Down the House’ gets a visit as well. A friend who heard that version said that he’d never noticed how melodically similar it is to your style even before you remixed it. What drew you to it?

You’ve been remixing a lot for Scion Audio Visual. How did that come about?

“I received an e-mail to possibly DJ a small party that Scion was sponsoring. The funny thing is that two weeks prior I bought a Scion Xb. The two events were unrelated. I was excited to do it, because I love the vehicle. I’m proud to be doing work for Scion A/V.

“There is a great appreciation there for music of all types, and a desire to experiment and combine different styles of music. The Boris remixes are great example of that.”

Finally, what besides this mix is in the works for you? Any albums or singles or further remixes coming up?

“Scion A/V will be releasing a song I wrote sang and produced called ‘I Might Be…’ It will have remixes by Joy Orbison, M.J. Cole, Feadz, and My Dear Disco. I’m looking forward to that. Before the end of December (hopefully) I will have my download site up and running. I will be selling my new releases, and giving music away as well.  I just completed a remix of VV Brown’s ” Shark In the Water”and will also be doing a remixes for My Dear Disco. January 8th I will be spinning at Fabric [with Rustie, Deadboy and more for Numbers]. That covers January…I have a lot of plans for 2010.”