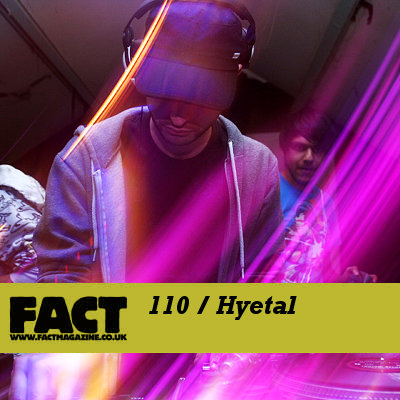 This Friday’s FACT mix is by Hyetal, the Bristol based producer responsible for one of the year’s best dancefloor jams, ‘Pixel Rainbow Sequence’.

Counting Starkey and more amongst his fans, Hyetal’s productions drip with colour, and his collaborations with Shortstuff have proved some of the year’s most intense club tracks. His FACT mix features new Hyetal and Shortstuff material, plus new dubs from Brackles, Julio Bashmore, NB Funky, Gemmy and more. It’s really, really good, and you should obviously download it. It’s even got Prince.

Tracklist and an interview with Hyetal over the page.

Hey Hyetal – who are you? Where are you from? What do you do?

“I’ve got a pretty bad attention span so i like to keep it varied. This mix starts with house(ish) stuff and ends with a sleazy 80s vibe.”

How would you describe your music?

What do you build on?

“Logic and as many analogue synths as possible.”

What role does colour play in your music? It seems to be a running theme – there’s the triangle you use for your avatar, ‘Pixel Rainbow Sequence’, ‘Gold Or Soul’…

“I’m very influenced by film soundtracks, my tunes are often made for imaginary images or scenes. I guess i use song titles as clues. Pixel rainbow sequence was a dream i had where i was in the game Bubble Bobble, throwing rainbows at people.”

Are there any other themes you find cropping up?

“I’ve been thinking about birds in flight a lot recently.”

Any releases on the way?

“Yeah my collaborations with Shortstuff, ‘Don’t Sleep’ and ‘Ice Cream’ will be dropping on Punch Drunk late January. There’s also a release on Soul Motive planned and more to be confirmed.”

What else should we know about Hyetal?