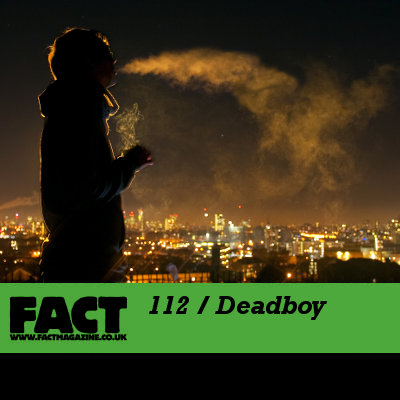 Our first FACT mix of the new year comes from Deadboy, one of our favourite artists to emerge from London’s blossoming house and garage underground and the man behind last year’s stunning ‘U Cheated’ single – a top thirty entry on our Top 100 Tracks of 2009.

A recent recruit to Glasgow’s Numbers, the umbrella label formed from Dress 2 Sweat, Wireblock and Stuff, Deadboy’s FACT mix has been in constant rotation at our office since its submission last year, and we couldn’t think of a better way to start off the year.

Featuring Theo Parrish, Scott Garcia, Julio Bashmore, Martyn and plenty of Deadboy’s own material, it’s a mix that perfectly reflects the blurred crossroads between house, garage, R’n’B and dubstep that the likes of Mosca, Bok Bok, Joy Orbison and more are currently inhibiting, with a sense of longing that runs through the mix – whether that’s for lovers past or the halcyon days of 2step. Bassline house star Burgaboy has rarely sounded as sad as he does on this mix.

For the tracklist and an interview with Deadboy hit up page two. Photography and help with the sleeve design comes courtesy of the talented Steve Braiden.

“Everyone can relate to a little heartache on the dancefloor.”

What’s your deal? Where do you come from?

“I come from South East London.”

What’s your background in music? When did you start producing – and who/what particularly inspired you?

“I started making tunes about 5 or 6 years ago I think. At the time I was getting really into 2 step, and early grime stuff like Jon E Cash, the Wiley eski tunes, El-B and Horsepower and stuff like that, then early dubstep stuff from Digital Mystikz, Slaughter Mob and the like. At the same time I was listening to a lot of other stuff like detroit techno, dancehall, dub, R’n’B, house and trying to incorporate those elements as well. Later on I got into bassline and then the UK Funky stuff and chucked that in there as well, but my main love and influence is garage.”

Your mix for FACT seems to have a lot of melancholy in it – from ‘K-I-S-S-I-N-G’ to the Theo Parrish cuts, to your own stuff like ‘U Cheated’ and ‘If U Want Me’. Is that a vibe you particularly go for in your music?

“Yeah I dont think I ever sit down and think “how can I make this tune sound sad”, I’m generally trying to make something hype, but I’m always naturally attracted to sad girly vocal samples in hype music. I love all those sad old garage tunes. Bassline is good for it as well. Everyone can relate to a little heartache on the dancefloor.”

“Yeah Hyper Black Bass is one of my mates who makes dancehall stuff solely on a pair of gameboys with nanoloop. I come along and stick dancehall acapellas on them, and when we play live I do it with a CDJ over the gameboys, and we have sirens and airhorns and stuff. It started as a bit of a laugh but people seem to like it, got a tune on the next Rough Trade comp. I’ve also done a cassette of hip hop beats I’ve made over the years.”

Tell us about your EP for Numbers, and the rest of the stuff you’ve got in store.

“If U Want Me is coming out on a 1 sided 12″ on Numbers with something special on the other side, hopefully in January. Its going to be the first release on the newly formed label so thats cool. Then after that got a 7″ coming out on Well Rounded of a couple of R’n’B refixes I’ve done, Cassie on one side and Ashanti on the other.”