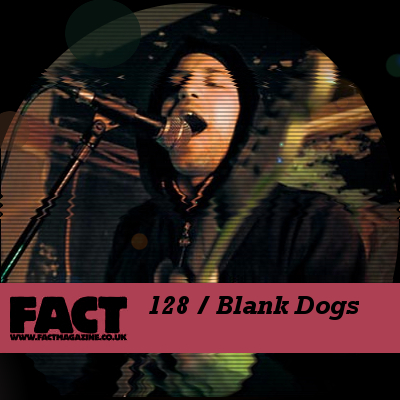 For this Monday’s FACT mix, we’ve finally got Blank Dogs on the buttons.

One of our favourite artists operating today, Blank Dogs is based in New York, and runs the Captured Tracks label, where he releases work by Woods, Dum Dum Girls and much more along with his own material. He also releases frequently on other labels, such as In the Red, and makes up one half of the Mayfair Set with Dum Dum Girls’ Dee Dee.

Blank Dogs’ music is classic alt-rock – it’s frequently described as lo-fi, but although his songs bear an obvious debt to cassette culture, it also owes something to the cleaner, radio-friendly but uncompromising punk of The Cure and Joy Division. Indeed, his new EP for Captured Tracks, Phrases, features some of Blank Dogs’ cleanest work to date.

Until last year, when he started playing live, Blank Dogs kept his identity anonymous, with press shots finding him wrapped in gauze and draped in sheets. He quit that when, in his own words from a future in-depth FACT interview, it started to distract from the music, and people started to assume that “the anonymity was a scam to sell records or whatever.”

His FACT mix is a collection of “current things [Dogs] has kept in rotation instead of old favourites”. We haven’t heard most of it before, and we’d wager you haven’t either – all the more reason to dig in. Tracklist, along with words from Blank Dogs on the tracks featured, can all be found over the page.

1. Chrisma “Calling”
I love pretty much everything Chrisma did, but this track has the weirdest guitar tone right from the start.

3. Astaron “Falling Apart”
An Austrian band from the mid-80’s I can’t find much about, kind of obsessing over it lately.

4. The Plugz “A Gain, A Loss”
I always though LA Punk was the best punk. It was a bit more edgy than NY stuff and not as fashion-oriented as the English stuff. I love the effects on the drums in the beginning.

5. Rheingold “Graffitis”
Something about the 1st Rheingold record. It’s so simple but it somehow has this expansive space feel to it.

6. Cosmetics “Honey Honey”
Love Cosmetics. We’re going on tour together in April. This track will be on their Captured Tracks LP, which they’re still working on.

7. Jackpots “Jack In The Box”
I’m more into the whimsy-pop aspect of 60’s Psychedelia than the noodly bits. This song is pure pop, but with some adventurous production for the time. This was a Swedish band and they mainly did covers, but their originals (like this one) are by far the best things they did.

8. The Apartments “Mr. Somewhere”
I guess I first heard this on a This Mortal Coil record, then I found the original and liked it more.

10. Happy Refugees “Screaming and Shouting”
Looking for this record.

11. Jo Squillo “Skizzo Skizzo”
Something about Continental New Wave made it more quirky, like they got to the right conclusion the wrong way. I think Jo Squillo is now a big TV personality in Italy.

12. Cindytalk “A Song of Changes”
Gordon Sharpe has one of the best voices I’ve heard, so distinct and full. I like how this song sounds like it’s constantly on the verge of falling apart.

13. Jeff & Jane Hudson “Fat of the Land”
This is from the LP Flesh which I’m reissuing this year.