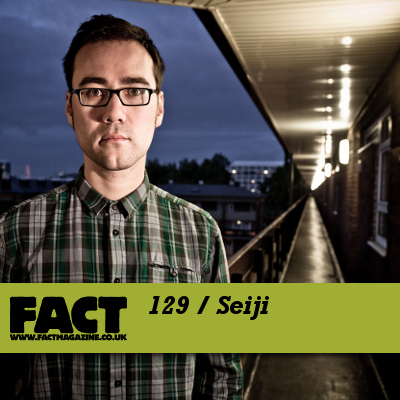 Paul Dolby – better known as Seiji – has played a hallowed role in the evolution and enrichment of UK dance music.

Ever since his 1996 debut, the Close Encounters EP, the Londoner has been engineering uniquely bashy, swung grooves that take inspiration from the special torques and syncopations of jazz and the musics of Africa, South America and the Caribbean. One of the progenitors of “broken beat”, and a long-time member of Bugz In The Attic, Seiji’s influence is now more keenly felt than ever, with myriad UK funky and contemporary garage producers referencing his work, consciously and, at times, unconsciously. 2562, Shortstuff, Martyn, Untold, Bok Bok, Altered Natives, Roska, Geeneus – these are just a few of the producers who owe a significant debt to Seiji.

Over the past decade and a half Dolby has proved a prolific and restless talent, presenting his own fresh and eccentric takes on house, hip-hop, R&B, drum ‘n bass, dancehall and 2-step, most recently making “weird rave” with Riton as Computer Juice. Still, if you’ve not checked out the wealth of paradigm-shifting material he recorded in the years 1995-2003, that’s where you should begin: get hold of his three 12″s for Reinforced, the incredible ‘Into The Now’ (released on 12″ by Dego’s 2000 Black imprint, subsequently licensed by Carl Craig’s Planet E) and – a particular FACT favourite – his none-more-bruk remix of Fertile Ground’s ‘The Moment’.

“I’m not interested in that bollocks about claiming this or we started that, it’s always been and always will be about making new and fresh music, not dwelling in the past.” – Seiji

Next week we’ll be presenting our selection of the 20 Best Broken Beats Records Ever Made, and the feature is heralded today by a superb new mix, exclusive to FACT, from Seiji. Weighing in at a colossal 29 tracks – the man is an incendiary, quick-mixing DJ, capable of shifting rhythms and tempos with supernatural skill and flair – it features no less than ten of his own productions, including the classic ‘Loose Lips’ and his recent remixes of Florence & The Machine and Gorillaz. Elsewhere there’s original ‘ardkore from Kaotic Chemistry, fresh dubstep from Skream and Mark Pritchard, house and funky from Mr Mageeka, DJ Gregory and Masters At Work, plus top-notch productions from Anthony ‘Shake’ Shakir, Sbtrkt, Greenmoney and Tim Green. It’s a mix that showcases the breadth and inclusivity of Seiji’s tastes, and it will also give you considerable insight into the depth, range and versatility of his own beats.

Those of you who know what’s what will already be downloading the mix. The rest of you, don’t sleep: here’s your one-stop opportunity to acquaint yourself with the work of a true dancefloor maverick. Get listening, and turn the page for our Q&A with Paul, wherein he tells us about his current projects (including his production work for Roisin Murphy’s new LP), and considers the meaning and legacy of ‘broken beat’.

“Well, I’ve put together a mix with loads of my own music, mostly new and some old, because thats how I’m DJing nowadays. I’ve mixed that up with some new music I’m feeling, underground heads stuff like the Mark Pritchard, but also some more commercial sounding stuff like the DJ Gregory / Sidney Sampson collaboration, which takes me back to the era when MAW [Masters at Work] were smashing the tribal broken house.

“I’m also feeling some new funky, tech house, garage and I’ve tried to mix it all in without making too much of a mess. I’ve also thrown in a couple of old skool hardcore classics, and dusted off some nuggets that I think got slept on at the time. I.G. Culture’s mix of  ‘Random’ for instance, at the time it just completely passed under everyone’s radar, too pop / urban for the heads and too broken for everyone else. Listen to it now and it sounds fresh…and despite BB [Big Brother] I still rate Sov.”

“Despite BB, I still rate Sov.”

There seems to be quite a revival of the broken style you helped pioneer going on – with people like Martin Kemp making quite broken, house tempo tracks and being accepted by the dubstep world. Is that something you’ve noticed?

“Yes it’s great to hear those kind of rhythms getting taken to another level. I’m not convinced that its necessarily a revival of the ‘broken’ style, I think that syncopated beats have gotten popular again because they are just really dope, whether its dubstep, garage, funky, Dutch house or whatever! Let’s face it, the rhythms themselves are as old as….the cavemen? Something like that.”

You’ve got a lot on your plate right now. This month you start a new run of singles, you’ve been working with Riton. How’s that working out for you?

“The Riton collaboration is massive. Getting to play with Riton’s vintage synth collection is the main reason I’m doing it, and it’s just good fun making weird rave music really. We’ve got the next Computer Juice track ready, it sounds like a dog barking, but in a really cool way.”

“I think that syncopated beats have gotten popular again because they are just really dope, whether its dubstep, garage, funky, Dutch house or whatever.”

To what extent are you and FunkinEven working on the new Roisin Murphy album? And how does it differ working with a vocalist like Roisin to making your solo stuff? How does it alter your approach, the working process, and so forth?

“We’ve done some bits and pieces together, working with FunkinEven was great because I got to see how he gets such a mental sound, and the secret is shitloads of programming! Working with Roisin is much more like being a ‘producer’, she is in the driving seat creatively and has really clear ideas and tastes, so the process is different, but it’s really interesting developing new skills when you have spent most of your musical life alone in a room with a sampler.”

What does the phrase ‘broken beat’ mean to you now? Is it in your past, or something that’s still relevant? Is it a style, a group of people exchanging ideas, or something else?

“In the days of Bugz and Co-Op [seminal Broken Beat night, formally at Plastic People] there was a bunch of us making music that didn’t fit with the existing genres, and we all seemed to like the beats syncopated. In the early days, though, the music we all made was really diverse, some was really jazzy, some was really techno-y electronica, some was hard club music. Not all of it conformed to the same kind of rhythm, there was shuffly brazilian grooves, fast hip hop, weird 6/8 time signatures and all sorts.”

“As the scene became more about the club, the music followed suit, and in the end it all boiled down to a sort of afro groove, like a fast bashment riddim. That groove is what I’d use the word ‘broken’ to describe now, because its an easy way of describing a kind of rhythm we hear all over the place in current dance music. That’s not to say I hear new records and say “oh that’s actually broken beat not funky”, I’m not interested in that bollocks about claiming this or we started that, it’s always been and always will be about making new and fresh music, not dwelling in the past.”

What current artists are you drawing inspiration from right now?

“Modeselektor, Mark Pritchard, Funkin Matt, Skream, Subwave, Shortstuff …too many to name them all! There’s so much good music around at the moment…”

What else have you got planned for the year ahead?

“Just looking to make good music and get it out there….I’m going to be releasing more music on my website seiji.co.uk, some proper records like the one just out now, but also carrying on with the seijigoodies freeness.

“I’ve been doing some collaborations here and there with Riton, Toddla T and others, so I’m just going to see where those take me.

“I’m learning to perform my own music ‘live’ as well, I’m going to mash that up together with DJing so that the set doesnt get too dry and I don’t look like I’m doing my email.”

Is Madlib the coolest person who’s ever shouted you out?

“What an honour, he’s a legend. Any other cool people who want to shout me, I’ll be checking my Twitter.”