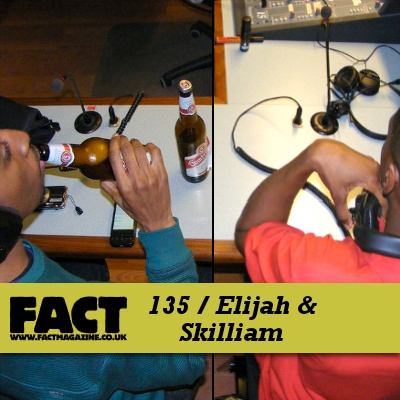 This Friday’s FACT mix is the work of modern grime standard bearers Elijah and Skilliam.

One of the most inspirational DJing partnerships in the UK, Elijah made a name for himself as the author of the humble Butterz blog, and one of the people behind Grime Forum, an active part of the grime scene which filled a hole left by Rinse FM and RWD’s declining forums and has since become the key hub for grime news and online controversy. More importantly, it spanned sister sites like Grimepedia, an online information source for a genre long associated with misinformation.

They’ve also done more than almost any grime DJs to date to turn the focus of an MC-dominated genre back to behind the decks. Speaking to Pitchfork recently, Elijah explains that he “loves the MCs”, but “[focuses] on the instrumental side because most MCs still don’t do vocal great productions. I’m not into the hype, because it is a distraction from the music.” Three years ago, Rinse FM’s most hyped shows were the ones with the most MCs – now it’s mostly instrumental marathons with Elijah, Skilliam and their peers JJ, Silencer and more.

What’s key with Elijah and Skilliam’s sets is the sheer amount of digging for new material they do, and their constant willingness to play tunes from new, often relatively unknown grime producers over more fashionable artists. While many grime DJs rely on old classics and modern anthems from the likes of Joker for a reaction, Elijah and Skilliam focus on new producers that they believe in, and a significant part of the recent rise in profile of SRC, Swindle, Royal T, D.O.K. and more can be attributed to them. This year, their Butterz label (Butterz 001, Terror Danjah’s ‘Bipolar‘ is out now) looks set to make that commitment physical.

“”I know there are loads of people in their bedrooms making grime for the love, and are not sure what to do with it because they don’t know any MCs.” Elijah explains in that aforementioned Pitchfork interview. “The DJs haven’t really made themselves easy to get in contact with, nor do they actively seek out and play the new ones they find. Some weeks I listen to nearly 100 new beats people sent [to me].”

It should come as no surprise then, that Elijah and Skilliam’s FACT mix is packed – packed – with exclusives. There’s unreleased and forthcoming material from SRC, Skepta, Joker, Terror Danjah (in fact, there’s a collaboration between the two titled ‘Gully Goon Estate’), Royal T, Starkey – download it below.