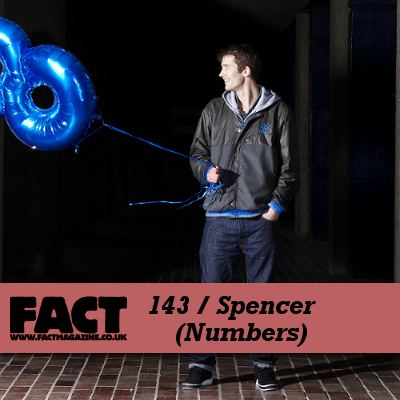 His selection of crunching, techno-infused hip-hop and dubstep-not-dubstep was a revelation, presaging the sound of Rustie, Hud Mo et al that we now all take for granted. Later, when we told him how much we enjoyed the set, he said, “Yeah, I was DJing with one deck because I lost one of my Serato records in my house the weekend before and I forgot – it was a fucking nightmare. Glad you enjoyed it though.”

That kind of sums up why we like the guy, and why we asked to him record a FACT mix for us. Fast-forward to 2010 and Numbers – the Glasgow-based label and party collective co-founded by Spencer – has become something of a phenomenon, the toast of everyone from The Guardian to (probably) Oprah. Combining the forces of Wireblock, Stuff and Dress 2 Sweat, what makes Numbers and its personnel special is the breadth and depth of their tastes. Though always on the look-out for the new thing, their sensibility is anchored in ageless techno, electro and hip-hop; the championing of upfront b-more, grime, dubstep, juke and funky doesn’t come at the cost of repping heroes like Juan Atkins, Kraftwerk and Drexciya. Numbers, and particularly Spencer, know where they’re coming from.

Spencer’s FACT mix is therefore a kaleidoscopic and history-hopping affair, packing thirty deadly tracks into a taut hour-long duration. Midwest sci-fi classics like Cybotron’s ‘Cosmic Cars’ and Mr Fingers’ ‘Distant Planet’ can be found alongside fresh dubstep and UK house from Sully, Altered Natives, Addison Groove and Mosca, and a glut of new and forthcoming Numbers cuts from Deadboy, Kavsrave, SRC and Taz Buckfaster. What more do you need to know? We can guarantee you’ll find no better soundtrack than this for the scorching weekend ahead.