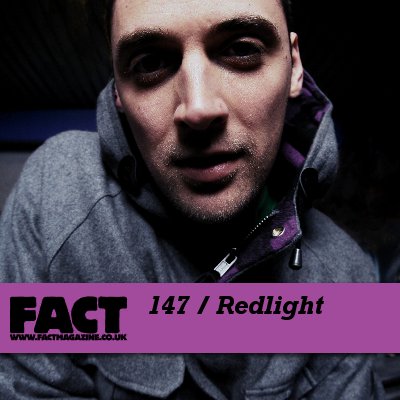 This Friday’s FACT mix is a fiery session from Bristol veteran Redlight.

Best known for his drum’n’bass productions as DJ Clipz for labels like Full Cycle and Audio Zoo, Redlight is the latest alter-ego of Hugh Pescod, which he’s used to explore an individual vision of bass music where grime, dubstep and squealing electro bleed into an overwhelmingly vibrant fusion, often soundtracked by ragga and grime vocalists.

His Lobster Boy EP from earlier this year saw him work with Boy Better Know’s Jammer and more, and Redlight’s recently been in the studio with Ben Westbeech, as well as Toddla T, Ms Dynamite, Serocee, Mz Bratt and Rusko. His new single, ‘Stupid’ is out now on Digital Soundboy, and he’ll be following it with ‘MDMA’, for Chase & Status’s label.

His FACT mix features tons of upfront material from himself, including some of those aforementioned collaborations and Redlight specials of ‘Wile Out’, ‘Hard’ and more. For an interview with Redlight, turn to page two of this article.

“I’m not confined to one style or BPM and I had more freedom in terms of how to express my creative output.”

You produced for ages as Clipz – what prompted the change to Redlight?

“I got to a point where I just wasn’t feeling inspired anymore with what I was doing as Clipz. I wanted a change, new challenge and a fresh start.”

Was it dubstep’s popularity that made you decide to go down the 140bpm route? Not that what you make is dubstep exactly, but you know…

“Haha, yeah that’s it – I thought let’s jump out of one scene, in to someone else’s…! Nah, I’m joking…I’d been making slower beats for a couple of years with vocalists for various different projects and I just found it more interesting musically. I’m not confined to one style or BPM and I had more freedom in terms of how to express my creative output. As Redlight, I want to start something fresh and be part of something that I helped to create. I also really enjoy working with different vocalists on their projects and my own output.”

Are you still making D’n’B, or are you a bit disatisfied with it?

Does the name Redlight have anything to do with Amsterdam?

“Haha! Nah, Clipz referred to when audio’s distorting on a mixing desk, it’s called clipping and a red light comes on, so the Redlight name is the continuation of that idea.”

“Yeah that’s what I’m really into right now – working with vocals and trying to get the best out of the artists I’m blessed to be working with.”

You seem to be working with loads of people – vocalists, Toddla T, Ben Westbeech. Tell us about some of the stuff you have going on.

“Yeah that’s what I’m really into right now – working with vocals and trying to get the best out of the artists I’m blessed to be working with. I’ve done a project with Ben Westbeech which has been a big mission and has pushed us both to do new things, that’s not quite finished yet. I’ve been working with Roses Gabor on her EP which I’m mixing down at the moment, I’ve got a track on Jammer’s new album, have been doing production work for Mz Bratt, just done a Kelly Rowland remix and have also been in the studio with Ms Dynamite recently as well. Toddla T and me are remixing the next Wiley single and I’ve got a tune on Rusko’s album too. It’s busy!”

“OK, the mix includes a lot of my own material and is basically the sound I’m in to and pushing at the moment. That’s it really!”

How’s the one 1Xtra show going so far?

“It was a great experience and came at a really good time to help get my new Redlight name out there, but sadly I’ve had to finish doing the show now to concentrate more on producing music as that’s the priority for me at the moment.”

What else should we know about Redlight ?