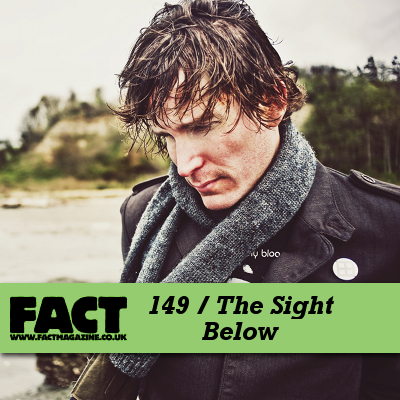 This Friday’s FACT mix comes from Seattle artist The Sight Below.

The formally anonymous Sight Below found an early home on Ghostly International, where he released several EPs and a debut album, the My Bloody Valentine-referencing (also check his t-shirt in the shot above) Glider. A record that took in Wolfgang Voigt’s work as Gas, British shoegaze and post-punk, it dreamt up a musical world like few others.

This year, The Sight Below returned with a new album, It All Falls Apart, which saw him delve further into beatless, drone-led material, and work with one of his biggest influences in Simon Scott of early ‘90s shoegaze heroes Slowdive, as well as Sub Pop vocalist Tiny Vipers. Slowdive open his FACT mix, which is an expert journey through various strains of shoegaze and post-punk, starring Spacemen 3, Cocteau Twins and more.

In TSB’s words, “everything here is from vinyl, some tracks sound shittier than others, ‘specially if they were on a 7”. There’s some creation, 4AD and Factory Records in the mix, but also  a few other “mainstream” things, so it is not all obscure.”