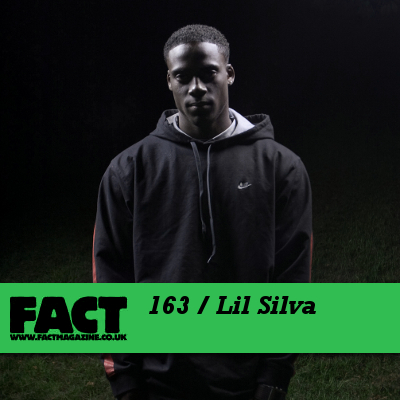 Emerging in late 2008 and perfectly catching the wave of UK Funky’s sudden increase in popularity, Lil Silva promptly delivered not one but two of the scene’s eternal anthems in the shape of his debut 12”, the amazing, still dance-rattling ‘Seasons’ / ‘Funky Flex’. Sine then, he’s never really let up: subsequent singles include ‘Different’ (later vocalled by Maxwell D as ‘Blackberry Hype’), ‘Pulse vs Flex’, and the recent Night Skanker EP on Night Slugs, which seems to be taking…well, everywhere and everyone by storm.

As a DJ, Silva is not to be messed with: his set was one of the best of FACT and Night Slugs’ recent party at Cable in London (and amid a line-up that also included Mala, Fiedel and Altered Natives, that’s no small achievement). His FACT mix features plenty of his own material, including two as-yet-untitled exclusives, as well as Champion’s brilliant ‘Lighter’, D’onaeo, FunkyStepz and Karizma. You even get Geeneus and Katy B’s cover of Innercity’s ‘Good Life’.