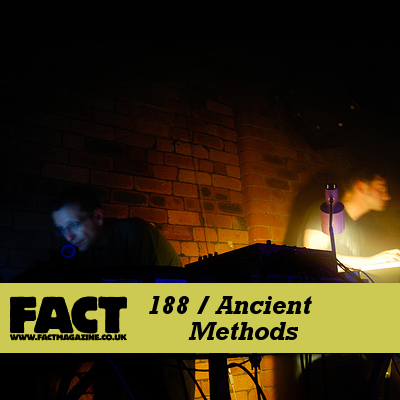 An unassuming duo comprised of members Beeks and Trias, Ancient Methods sent shockwaves through the dance music underground last year with their loose trilogy of eye-catchingly packaged EPs – First Method, Second Method and Third Method. Their reputation was swiftly cemented when they contributed a track to a split 12″ from experimental-leaning British label RSB, and collaborated with Regis (Downwards/Sandwell District) as Ugandan Methods on Mat Oput – 1/2.

The producers’ music itself recalls British Murder Boys, Jeff Mills, Surgeon, E Comm, Basic Channel at their steeliest – all artists who make thunderous, full-frontal and at times wilfully distorted techno that is also supremely funky and subtly layered, full of swing and dub-space. The now classic mix that they recorded for the mnml ssgs blog last year featured tracks and textures – in amidst the piledriving club material – from Atom TM, Mika Vainio, Fennesz, BJ Nilsen, which gives you some idea of their sophisticated grasp of sound design.

Ancient Methods’ FACT mix was recorded live at the Life Festival in Ireland earlier this year. “We recorded with an extra, external microphone to capture some of that live atmosphere,” they tell us via e-mail. This is techno that pines for and evokes the cavernous clubs, warehouses and repurposed industrial spaces that nurtured the sound in the early 90s, a time when the music and surrounding culture had no sense of its own future and the limitations that would come with it. True electronic body music.