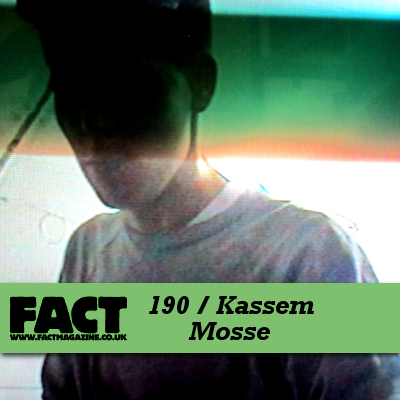 Kassem Mosse frankly blows us away with his FACT mix 190.

The German DJ/producer, real name Gunnar Wendel, has been behind some of the most curious and invigorating house and techno records of the past four years, first coming to our attention with his rugged, syrup-slow contribution to part three of Workshop’s 12″ series. His Aqueous Haze (The World Disappeared Into An) EP followed soon after, and its B-side ‘578’ was given a new lease of life this year when Omar-S remixed it and released two versions on his FXHE label.

It’s testament to the Wendel’s versatility and worth as a producer that he’s in not just with the serious heads from Berlin and Detroit, but those from London as well. A Kassem Mosse remix is forthcoming on Joy Orbison’s Doldrums label, and he recently released two tracks, including the grotty beatdown stomper ‘We Speak To Those, on Nonplus Records, the imprint operated by d’n’b emigres Instra:mental and home also to releases by ASC, Skream, dBridge and Actress. Oh, and Mosse has just contributed to the star-studded Commix remix album alongside the likes of Pangaea, Burial and Holland’s 2562.

The Kassem Mosse FACT mix reflects the breadth of Wendel’s production output, but firmly anchors itself in crunchy Detroit fare from Urban Tribe, Andres, Moodymann, Theo Parrish and Leron Carson. Put together with a real mastery of groove across different rhythms and tempos, it’s simply one of the most absorbing and addictive FACT mixes we’ve issued all year.