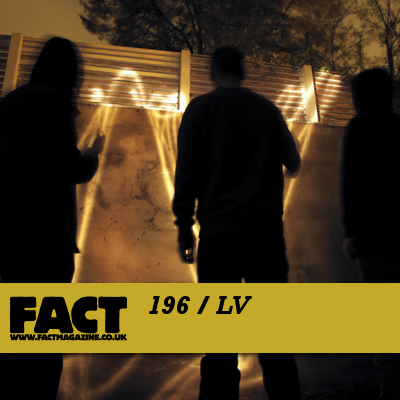 This Monday’s FACT mix comes from LV, the quiet men of the Hyperdub stable.

LV were the first act to release on Hyperdub outside the trio of Kode9, Burial and The Bug, making their label debut with 2007’s ‘Globetrotting’, a collaboration with veteran reggae singer Errol Bellot. The years since have seen a steady stream of LV releases on Hyperdub, Hemlock, 2nd Drop and Keysound, with the London-based group content to stay casually in the shadows; the majority not knowing the members’ identity or background.

Last Christmas, the group’s Gervase took an extended trip to his birthplace South Africa, immersing himself in the house music scene there and collaborating with people like Spoek Mathambo and Okmalumkoolkat, who features on LV’s new single and their most well received to date, ‘Boomslang’. For more about Gerv’s trip, we’d point you to this interview with Blackdown, where he talks in detail about the local music and culture.

We’ll be posting an in-depth interview with LV in the near future, but first here’s their FACT mix, a multi-layered meltdown of kwaito, grime, funky and more. There’s no tracklist, and as is the nature of the mix, it’s not always obvious where tracks start and finish, but spotters should quickly spot both sides of LV’s ‘Boomslang’ single and recognisable cuts by Scratcha DVA, T. Williams, Cooly G and more.