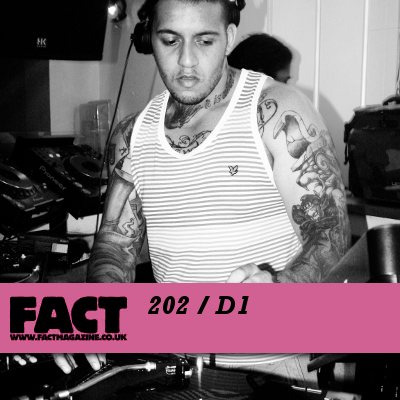 This morning’s FACT mix comes from one of dubstep’s first titans, and one of the UK’s most consistant producers, D1.

Known as Dwayne Marsh to his parents, one of whom, Antony Marsh was a jungle producer himself, D1 cemented his place in dubstep’s history books with a series of releases in the genre’s DMZ and Tempa dominated half-step days, amongst them the incredible ‘Crack Bong’, a track whose brittle drums, time-stretched samples and main pulse, warped to disorientating proportions, made it perhaps the scariest thing dubstep had produced at that point in its history.

D1’s release schedule isn’t prolific, but when the 12″s drop they matter. 2008’s V2 and V3 EPs for Tempa were firm favourites among dubstep fans, while ‘Sorrow’ remains one of the genre’s greatest unreleased dubplates. This year, Marsh released ‘Jus Business’ / ‘Pitcher’, a Dub Police single that continues the bounding propulsion of D1’s past work while looking to UK hardcore and rave for inspiration.

His FACT mix centres around his own dubplates, with that combination of punchy highs and rumbling basslines that fans of D1 will instantly recognise. Outside contributions come from Dub Police cohorts Caspa, The Others and Emalkay, along with Benga and Kutz.

While you download, turn over the page for a short interview with D1 about what he’s feeling right now and where he’s doing.

What’s going on in the world of D1?

Any new releases or projects on the horizon?

“Yeah, early 2011 ‘Bleeps to Broadway’ and ‘Flood of Emotions’ (feat. Jenna G) should be coming out on Dub Police and hopefully a My Style mix CD should be following not long after that.”

You’ve traditionally released music quite slowly and steadily, has that been an intentional thing over the years?

“Not really, I’ve always had a lot of music around me but through situation and circumstance I have never really been continuous with releases. I’m hoping 2011 can see at least three releases throughout the year, accompanied with other projects hopefully.”

You obviously made your name in dubstep, a genre which, as a sound, is mutating in a lot of directions right now. Where do you think your own sound is going, and what do you find particularly inspiring right now?

“I don’t know really, I mean obviously I’m not really making those dark half-step tunes that i got known for anymore… It’s a lot more musical now a lot of the stuff I’m doing, I quite like where people like Redlight have positioned themselves in the sense that it’s still dubstep but it’s also party music if thats the right term, where I think you can have a bit of variation in your sound rather than being pigeon holed. At the minute I seem to be making a lot of hardcore type tracks, along with quite a few song-based type tracks. I would like to work with a lot more vocalists because I think my sound at the moment leans towards that inspiration I find everywhere. But in terms of producers at the minute Subscape is absolutely killing it right now.”

“This mix is a good look at where I am musically right now and the type of stuff I’m feeling. I think it also gives a good idea of what a dj set from me is like. Anyway enough from me, hope you all enjoy the mix.”