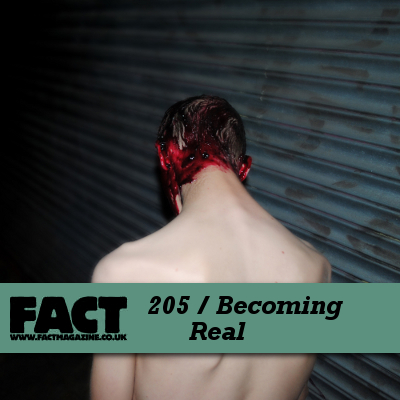 This morning’s FACT mix comes from Becoming Real, one of the darkest artists to emerge from London this year.

Real name Toby Ridler, Becoming Real makes music that straddles the blackest corners of grime, juke and hip-hop, exploring Lacan’s theories about “reality” and the “real”; in Ridler’s terms, music that “isn’t haunting in itself … more that it was being haunted.” Ghosts permeate Becoming Real’s music, from ‘The Thing”s ghoulish shapes, twisted around banisters, to the quivering whispers in the background of ‘Like Me’, his new Trim-featuring single.

Becoming Real’s FACT mix features the two clearest musical influences on what he makes, Wiley and Zomby, plus his own remixes of Blonde Redhead, Forest Swords and Des’ree, a new untitled cut and a healthy batch of Stalker, oOoOO and Burial. His Spectre EP is out now, and he’s currently supporting Salem on their UK tour.