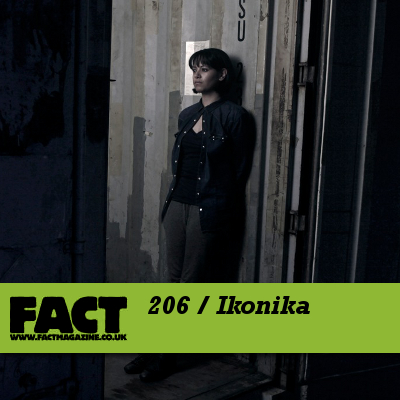 At this point, Ikonika should need no introduction.

The London artist will shortly bring to an end the busiest year to date of her musical career, a year that saw her release her debut album Contact, Love, Want, Have on Hyperdub, deliver a string of remixes for labels like Planet Mu, Night Slugs, Thisisnotanexit and LuckyMe, constantly tour and, last but not least, start up Hum & Buzz, the record label she runs with Optimum.

Next year Ikonika plans to focus on the label, and her FACT mix features a slew of forthcoming Hum & Buzz material from Optimum, Dro Carey and herself, as well as new dubplates from Deep Teknologi, Bok Bok and more. Download it below, and turn the page for an interview with Ikonika about the year she’s had and what lies ahead.

“All good I think. I’ve just been nominated for Best DJ’for DJ Mag’s Best of British awards. It’s very unexpected but nevertheless a real honour because I love mixing. The first thing I do these days is have a mix and I really take the time to make sure my skills are tight and that my selection is always there. I’m up against Carl Cox who I really look up to. I’m obviously not going to win but just to be recognised for my hard work this year is simply amazing.”

You and Optimum launched your long-mooted Hum+Buzz label this year, how’s that working out?

“We had our first release in September. We wanted it to be a bit low key, like we haven’t been doing much press for it and I don’t think anyone really reviewed ‘Aqueous Cream’ but we’ve managed to sell the amount we estimated, so we are happy about that. In 2011 we are really looking to get the name out there and maybe start our own Hum+Buzz club nights.”

What do you guys have forthcoming on it?

“Optimum has just readied the follow up to his debut ‘Max Power’ (Planet Mu), so expect that early next year. We’ve also just signed Sydney based producer Dro Carey. I found his music browsing Girl Unit YouTube videos and got in touch with him through Twitter. His music grabbed me instantly and I feel very proud that we are able to release a 12” from him. You can find the A side on the mix I did for you. His 12” will come out right after Optimum’s and we are excited about having a full sleeve for his Hum+Buzz debut. Later in the year we have EPs from Brenmar, glamFranklin and J.O.H.  I will also release a double pack around springtime, we are contemplating about putting that out on CD as well, a mini album if you like.”

Obviously you released your debut album this year, how has that changed the way you’re approaching music?

“My workload changed more than anything. My discography now practically overshadows everything I’d ever done prior to CLWH and that’s mainly to do with the amount of remixes I took on this year. In 2011 I’m not going to release as much. I need to chill for a second and digest everything. I mainly just want to concentrate Hum+Buzz and DJing.”

You said in an interview not so long ago that your next album would be in quite a different style, and that you were ditching the bleeps that are so associated with Ikonika’s sound. Can you tell us any more about this?

“The thing about me is that I like change, I need to progress. I’ve been experimenting with new sounds and palettes and they just don’t involve bleeps. My double pack will have tracks like ‘KaKa’ and ‘Sea Synths’ on it, which uses traditional Ikonika bleep sounds, but the rest of the EP is a bit more structured, more spaced out and contemplated. I think it’s a good mix and I reckon as we progress through 2011 the tracks are going to get darker, it’s just how I’m feeling right now. I don’t think I want to play anymore.”

“The mix showcases the new style in my productions with tunes like ‘Rope’, ‘Off Mode’, ‘Dance There & Back’ and ‘Fleas’. It also has the last ever bleep tune [laughs] there’s no release plans for that track. I wanted to give it out for free but it gets such a good reaction when I play it out so I’m a little confused.

“I think this mix really builds; it’s going to be my last mix for a while so I really wanted the selection to speak. The style of tracks I’ve chosen are the kind that I play live. I thought about doing a best of 2010 mix but 80% of tracks I loved from this year were released on Night Slugs and it would honestly just look like a Bok Bok or L-Vis 1990 Night Slugs showcase mix.

“I ended the mix with Africa Hitech’s ’93 Million Miles’ and Dro Carey’s ‘Candy Red’ just to digest the hype of the previous six tracks. And also these two tracks really work with my surroundings, I live near Heathrow and my close music friends all live in South London. I feel very dislocated from London at times because I’m stuck in this cocoon in West West West London. In my back garden I look at the planes queuing up to land and I get a bit reflective when I listen to these two tunes knowing that Mark Pritchard and Dro Carey are both based in Australia.”

Anything pencilled in for next year already?

“Apart from the Hum+Buzz release, I should have something out on Illum Sphere’s Hoya:Hoya label. I’ve also done a track for Musicity inspired by Battersea Power House called ‘Battery Powered’. I am told it will come out on 7” but if you visit the power house itself you can download the track for free using this app.