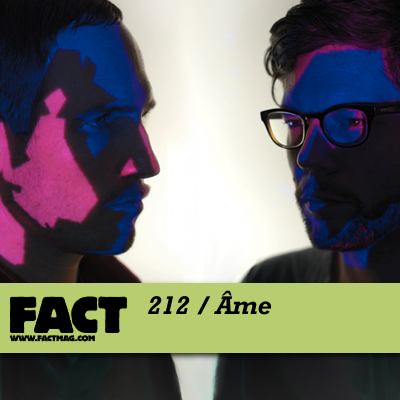 Following a deservedly boozy and bloated Christmas break, the FACT mix series is back.

We kick off the new year with a new mix by German deep house superheroes Âme. It finds the duo of Kristian Beyer and Frank Wiedemann digging deep – and wide – to create a history and genre-hopping excursion that nonetheless keeps its feet firmly on the dancefloor. Fans will recognise that it’s similar in spirit to The Grandfather Paradox, their memorable 2009 exploration of minimalist music (from Steve Reich to Plastikman), created in collaboration with Dixon and Henrik Schwarz.

Âme have been in our lives since 2003, and have proven to be among the most quietly influential dance music producers of their generation, their early work heralding, and even inspiring, a whole new wave of artists refashioning and recombining Detroit techno and deep house tropes according to cutting edge production techniques.

They first made their name with dazzling singles like ‘Mifune’/’Shiro’ and a self-titled album for Sonar Kollektiv in 2004, but it was with a succession of superb remixes for the likes of Roy Ayers, Akabu, Truby Trio and Ferrer & Sydenham (their version outshining the source material in virtually ever case) and with the establishment of their own imprint, Innervisions, co-piloted by Dixon and Schwarz, that they really developed their own voice – leading to 2005’s Rej EP, a bona fide classic. Since then, every Ame 12″ has been an event – last year’s ‘Rose Sselavy’ and its terrific B-side ‘Junggesellenmaschine’ exemplify Beyer and Wiedemann’s mature, elegantly engineered but always impassioned and energetic approach to house music.

Their FACT mix, entitled Primary Structures, will be officially released on CD by Innervisions later this month. Keep an eye on their website for more information.