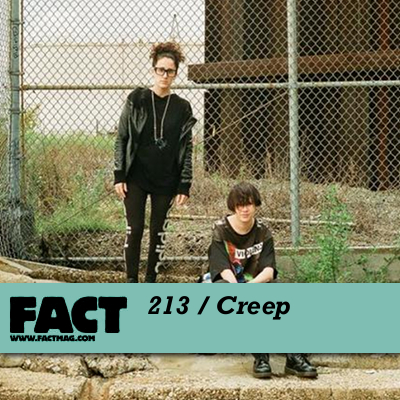 The Brooklyn duo of Lauren Flax and Lauren Dillard emerged last year, and for better or worse were pretty much immediately lumped in with the nascent witch-house trend (the crucifix logo on their debut single was kind of asking for it). Said debut single, ‘Days’, was released by Young Turks and featured vocals from The xx‘s Romy Madley-Croft doing her breathy, gothy, lovelorn thing. The skittering 808s and sickly synths in their tracks are undeniably reminiscent of Salem, but Flax and Dillard’s production is altogether smoother and less fucked-up sound than that of their peers; unlike most drag, it doesn’t drag, it has a real 4/4 momentum to it; if anything, CREEP put the house in witch-house.

Their FACT mix eschews the gloomy and the eldritch almost entirely, and focusses on heavily syncopated R&B and house mutations sourced from under and overground alike. The purple grime and psyched-out dubstep of Guido and Dark Sky sits alongside Ciara and Kanye, the sugary funky of Katy B and Ms Dynamite is offset by the pensive techno of Pantha Du Prince, and there’s an as-yet-unreleased Drop The Lime remix of CREEP’s own ‘Days’ to listen out for too. It’s an unpretentious, unrelenting dancefloor assault, betraying Flax’s roots as an acclaimed club selector (she’s Fischerspooner’s favoured tour DJ), and it demonstrates that CREEP have many more strings to their bow than lazy genre tagging will allow.

‘Days’ is out digitally now, with remixes from Deadboy, Azari & II and Soul Clap, and new single ‘You’ – featuring Nina Sky – is soon to drop, accompanied by a collaboration with Planningtorock. An album on Young Turks is expected later in the year.