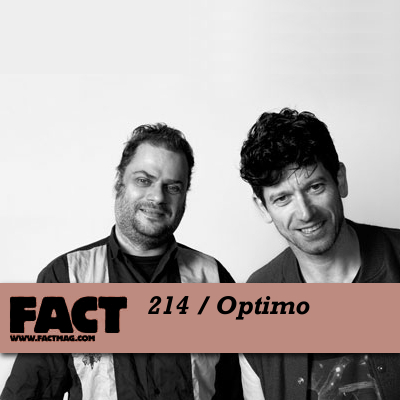 FACT mix is a special selection by JD Twitch of Optimo, conceived with the noble aim of putting you in “a trance-like state”.

A natural companion to Twitch and Wilkes’ Sleepwalking compilation of 2009, this is a mix that treads lightly but packs a considerable punch. Rather than turning out a set of disco/techno bangers – something we all know Optimo to be eminently capable of – Twitch has focussed here on the more reflective and ambient-leaning music in his life. His original intention was to create a completely beatless mix, and while the final product is not exactly percussion-free, crucially there’s nothing in the way of straightforward 4/4 – any drums you hear in this mix are used subtly, as colour or texture; they’re not there to drive the music forward, and they certainly don’t occupy centre-stage.

We’ll be revealing the tracklist later this week, suffice it to say for now that it’s positively bloated with the kind of exquisite obscurities that Twitch, for us one of the UK’s most catholic and discerning record collectors, is renowned for digging up. You probably won’t have any trouble spotting the tracks from Conrad Schnitzler and Forest Swords, but you may struggle with the rest: all we’ll say for now us that a good number of them are drawn from the 80s industrial explosion, with missives too from the worlds of fourth world jazz, avant-garde techno and modern classical.

We’ll let the man who put it all together tell you more.

“I spend vast amounts of my life listening to, hearing, or programming drums,” says Twitch. “I’ve probably heard more kick drums than 99.999% of the world’s population. I very rarely use an iPod, but on a recent trip to Australia I dug mine out of a drawer so I could listen to some music on the flight and noticed almost everything I had loaded onto it had no drums. Perhaps this was a subconscious reaction to listening to so many beats? Whatever, a lot of the music – combined with the hum of the engines – put me in a trance-like state which gave rise to my wanting to put together a mix that resembled that experience.

“I’d say this mix is beatless rather than ambient as a definition of ambient is ‘a background music without rhythmic elements’. That applies to some of the selections here but several of the tracks are definitely rhythmic in that they pulse or move forward without the need of a kick drum to propel them. In the early 90s, for a few years, along with some friends I used to run a Sunday evening soiree called Sonora that focussed on this kind of music. We had Autechre, Zoviet France, Move D and a host of other artists play live sets and Richie Hawtin, Andrew Weatherall and Mixmaster Morris came and played beatless sets of music. Some of these selections are tracks that were big favourites then – Mixmaster Morris introduced me to Conrad Schnitzler – the other tracks are simply eternal favourites that always transport me to another place.”

It’s an interesting time for Optimo at the moment. 2010 saw them retire their long-running, eponymous Glasgow clubnight, but they continue to be in-demand DJs all over the globe, and they’ve been using their newfound time and mental space to the benefit of us all: last year saw them put together a barnstorming Fabric mix CD, and their Optimo Music label was responsible for one of last year’s most remarkable reissues, Chris Carter’s The Spaces Between, as well singles from Space System and The Green Door Kids. 2011 is going to be similarly noisy: releases from Factory Floor, Naum Gabo and another Chris Carter reissue (!) are planned, while Twitch-produced albums from Sons & Daughters and Tussle will also see release.

For now, get a brew on, lean back and treat yourself to FACT mix 214; the perfect companion – and antidote – to these dark, rain-sodden winter months.

Update: for whatever reason, Soundcloud’s been playing up this week. If you can’t download or stream this mix using the Soundcloud player, use the direct download link below. It’s there for a reason.