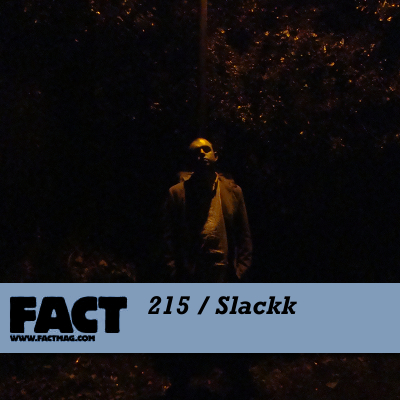 In the press release for Slackk’s recent single for Numbers, ‘Theme from Slackk’, there’s a line about him breaking down the walls that separate Chicago, Detroit and London and using the pieces to build his own strand of house music.

People always make claims like this, and it’s usually nothing more than a reference to by-the-numbers genre hybridisation. But Slackk, Liverpool born and bred but currently based in London, makes house music that genuinely exists without borders, compromise or obligation – rough, rolling tracks that usually have no aim beyond jacking, and that’s just fine. In them, you’ll find glimpses of Kerri Chandler, Model 500, Wiley, Phuture 303 and more, but overall they just sound like Slackk; one of the most singular, marmite producers in the UK already, and he’s only been releasing singles for a year.

Grime is a huge influence on Slackk – he first appeared on our radars as the man behind Grimetapes, a pirate radio archive website – and if you couldn’t tell that from his own productions, two of which, ‘Fire Flies’ and ‘Eski Clicks’ are edits of Wiley classics, then you definitely will from his FACT mix, which features new material from Spooky, Darq E Freaker and Wiley alongside a ton of new dubs from the man himself.