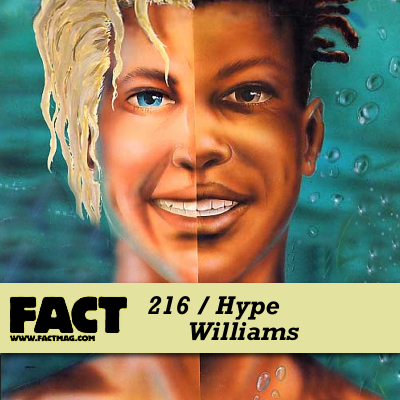 We’re very pleased to have coaxed a FACT mix out of Hype Williams, and a blinding one at that.

Ostensibly a duo – Russia-born Inga Copeland and London’s Dean Blunt – the story goes that Hype Williams is in fact a relay art project curated and possibly founded by one Denna Frances Glass, and that Copeland and Blunt are simply the current baton-holders. Who knows? What is certain is that the cult reputation Hype Williams have built up over the past year is thoroughly well-deserved, with several brilliant 7″s and LPs – not to mention a run of séance-like live performances around the world – already to their name.

Perhaps inevitably, the Berlin-based outfit often find themselves mentioned in the same breath as America’s deluge of hypnagogic pop acts, but Copeland and Blunt don’t see themselves as part of that scene at all. You can’t really blame them: while they are, like their h-pop counterparts, wont to repurpose the shrapnel of mainstream media culture in pursuit of a more surreal and psychedelic muse, there’s a hardness, a heaviness and a troubled quality to their tracks that renders them a world away from the nostalgic meta-pop cuteness of, say, Ducktails. Talking to Lisa Blanning in the current issue of The Wire, Blunt makes his allegiances clear: “I am really, really into sounds of the UK and I’m really into the darkness and the moodiness of it that no one else can do. It’s in Jungle. It’s in Hardcore, it’s in so many different types of music. It’s in music like Shadow Ring, it’s in This Heat…”

Indeed, even when Hype Williams source material is explicitly North American – as in ‘Ooovrrr’, their re-edit of Canadian rapper Drake, found on last year’s Do Roids And Kill E’rything 7″ – they bring an unmistakable UK burnish and heft to proceedings: withered synths somewhere between the miasmic jungle of Gerald Simpson’s Black Secret Technology and the provincial minimal wave of a Nagamatzu or a Sudeten Creche, and thick, over-loaded sub sounds clearly sculpted with soundsystems in mind. Even their most “lo-fi” productions pack a low-end punch that bespeak a long immersion in the heaviest underground dance tackle. And yet it would be foolish to suggest that there’s not a strong pop strain running in parallel through Hype Williams work. It’s there in ‘The Throning’, a haunting but unashamedly pretty cover of Sade’s ‘The Sweetest Taboo’, its skidding mousetrap percussion only serving to amplify the tenderness and vulnerability in Copeland’s vocal. Hip-hop is obviously a huge influence on their use of samples and slouchy, smoked-out rhythms, but so too is a very English strain of audio absurdism and necromancy – it’s easy to detect affinities with Mordant Music, The Focus Group and Vindicatrix, and it’s unsurprising to find a sketch from Chris Morris’s Blue Jam lurking in their FACT mix.

A lot of people have taken against Hype Williams for what they perceive to be an irksomely sardonic art-world sensibility, an ironic distance, and that conceited obfuscation of their own identities and strategies. But why should playfulness be so objectionable? If there’s one thing that deep immersion in the pair’s work yields, it’s the realisation that their playfulness is itself a kind of sincerity – behind the assumed names and silly titles there’s an unshakable naivety and idealism at work, a commitment to doing things their own way and bugger the consequences. “The best art is funny,” says Blunt. “The best art has humour in it. You can’t take yourself too seriously.”

Their FACT mix is an epic, intrepid survey of the Hype Williams universe, touching on the billowing AM pop of Steely Dan and Fleetwood Mac, rough-hewn garage and grime from So Solid Crew and Ruff Sqwad, black metal abstraction from Burzum, sun-dried dub from Augustus Pablo, urgent art-rock from Beat Happening and The Fall, gallows humour from Lenny Bruce and Chris Morris, paper-thin synth-pop from Bardeux, slick hip-hop from Jaheim. What’s more, you get two previously unreleased Hype Williams tracks, ‘Farthing Wood Dub’ and ‘Businessline’, in the bargain.

Having released two albums last year, Untitled on Carnivals and Find Out What Happens When People Stop Being Polite, And Start Gettin Reel on De Stijl, Hype Williams are soon to release another. Entitled One Nation, it’s due out next month via Hippos In Tanks, the US label that’s home to White Car, D’eon, Laurel Halo and Dan ‘Oneohtrix Point Never’ Lopatin’s Games. They’re also  embarking on a UK tour in support of it – more info here.