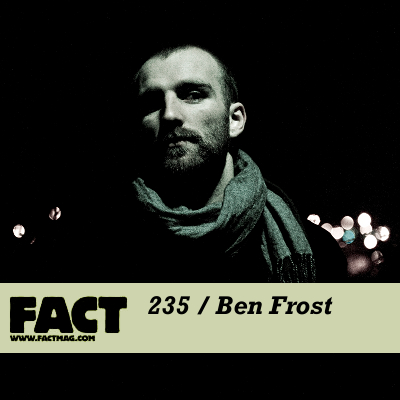 The Iceland-based Australian has been heavily involved in music since the turn of the century, but his breakthrough as a recording artist came with the 2007 album Theory Of Machines, and his reputation was cemented by its 2009 follow-up, By The Throat. Influenced by noise, dark ambient, industrial, black metal and classical minimalism, these records are possessed of a power – emotional and moreover physical – that is simply astonishing. Not for nothing for The Wire once moved to describe Frost’s music as “Arvo Pärt as arranged by Trent Reznor.”

While Frost’s most satisfying releases, for us, are those where he’s exploring the more violent side of his sonic imagination – honestly, if you’ve not yet checked out By The Throat, do yourself a favour and get hold of a copy now; it’s every bit as terrifying and thrilling as its title suggests – some of his most objectively impressive work is altogether more pensive and reflective (2003’s Steel Wound LP, an ambient guitar workout, is a notable stand-out). He’s also a prolific collaborator, having worked extensively with the likes of Bonnie ‘Prince’ Billy, Can’s Damo Suzuki and Oren Ambarchi (in the Branca and Chatham-inspired Husbands trio), and has remixed Björk, Machinefabriek and Raster-Noton’s Kangding Ray.

Frost’s latest work is certainly pensive and reflective, and certainly collaborative. Conceived and executed with composer/arranger Daníel Bjarnason and Sinfonietta Cracovia, We Don’t Need Other Worlds. We Need Mirrors: Music For Solaris was commissioned by the Unsound Festival to mark the 50th anniversary of the novel Solaris by Krakow’s Stanislaw Lem, which Tarkovsky’s existential sci-fi masterpiece of the same name. Frost’s starting-point for the piece was his dissatisfaction with Eduard Artemiev’s score for Tarkovsky’s movie, which he felt “compounded the external, science fiction elements of the story rather than exploring the internal, the human.” He and Bjarnason began by improvising to images from the film on prepared piano and heavily processed electric guitars.

“It occurred to me that an interesting way to approach the orchestration of the work would be to mirror that materialization,” Frost says. “I started playing around with music software designed to recognize tonal and rhythmic structure within polyphonic – that is, complicated – recordings.”

Frost programmed the software to act like Solaris, “creating a sort of ghostly facsimile of their original recordings in digital form, but without the full story.” These ideas were informed by his conversations with Brian Eno, who selected Frost as his protégé in the Rolex Mentor and Protégé Arts Initiative.

“Conversation between Brian and me often gravitates to the idea of relinquished control in art and specifically digital composition. When machines attempt to be human, the question arises of how you can forcibly manipulate situations to encourage error, mistranslation and loss of control… non-linearity and chaos within systems and within music is definitely a fascination we share.”

“As such, in Music For Solaris the software didn’t see the chain of processing that I fed my guitars through or see Daníel prepare the piano. The results were essentially the same, but lacked an indefinable humanity, with missing and added elements, glitches, irregularities and holes.”

Bjarnason proceeded to work this material into a form that could work for the string players of Sinfonietta Cracovia. Eno attended their rehearsals with the orchestra in Krakow in Summer 2010, and, having proven to themselves that their concept and strategy was sound, they returned to Iceland to complete work on it.

“What was totally fascinating to me was watching these people interpret something with no frame of reference except Daníel’s score,” says Frost. “Listening to them perform ostensibly ‘digital’ effects and voicing ghost harmonics that all of a sudden existed as written notes and phrases – it felt extremely alien.”

“The musicians have to play in a slightly ‘electronic’ way,” adds Bjarnason. “For example to ask each player to imagine that they were playing through a delay effect, so they had to actually play the delay themselves.”

Music For Solaris, set for album release through Bedroom Community later this year, premiered live at the 2010 Unsound Festival in Krakow last October, accompanied by visuals from Brian Eno and Nick Robertson. It will receive its North American premiere next week as part of Unsound Festival New York 2011. The concert, presented with Sacrum Profanum Festival, and co-organized with Krakow Festival Office and the Adam Mickiewicz Institute, takes place in the Lincoln Center’s Alice Tully Hall on Wednesday 6 April, and will also feature performances by Sinfonietta Cracovia of work by Steve Reich and Krzysztof Penderecki. More information and tickets here.

To herald next weeks show, Frost has put together a FACT mix – to the best of our knowledge, his first ever offering of the kind – reflecting his current and enduring obsessions alike. Subtitled Ben Frost Has No Business DJing, it takes in visceral music from Chris Watson, Metallica, Tim Hecker, Burial, Colin Stetson and Penderecki, among others, and finishes with an excerpt from Music For Solaris. Download it below.