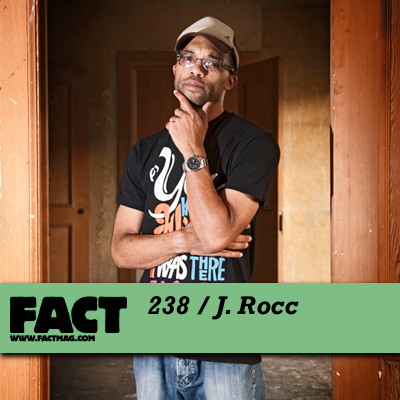 A renowned DJ since his work with PSK in the ’80s, Rocc helped formed the World Famous Beat Junkies (to give them their full name) in 1992, becoming a hero to future generations of turntablists and crate diggers alike in the process. The crew still operates now, with members like Babu and D-Styles holding legendary status in underground hip-hop circles, while J. Rocc’s reputation has grown and grown in the decade and a half since – he’s toured with Madlib, Mos Def & Talib Kweli, Jurassic 5 and more, and as a producer has collaborated with both Madlib and J Dilla.

This month, J. Rocc released his first ever album, the gloriously sun-weathered Some Cold Rock Stuf for Stones Throw. To celebrate, we’re hosting a FACT mix of dusty house, hip-hop and disco from your boy; we’ve asked for a tracklisting, but don’t expect one to appear any time soon.