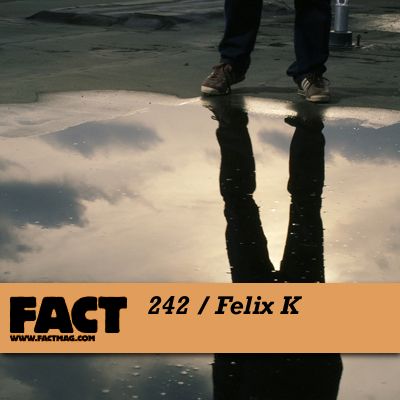 We’re pleased to have one of our favourite producers and DJs of recent times stepping up to deliver the 242nd episode in our FACT mix series. Felix K – Felix Krone, to give him his full name – has been a respected and active player in Berlin’s drum ‘n bass scene since ’95. His Hidden Hawaii label was founded in 2008, providing an outlet for releases from himself, Crackle Wizard, Double O and other talents, but it was the launch, in 2009, of the QNS (Quantity Not Sufficient) imprint and production project – that saw Felix’s work reach a wider audience, striking a chord not just with fans of forward-thinking dnb but also those of techno, dubstep and adventurous electronic music in general.

The Felix/QNS style – agile, minimalist but crucially rude dnb with a strong, tunnelistic techno influence  – is instantly recognisable. Contemporary comparisons can be made with the scuttling, detailed constructions of Rockwell, the abstract beat science of T++, not to mention the early work of Instra:mental, ASC and other NonPlus affiliates, but the music also harks back to the tough, aerodynamic rollers of Photek, Doc Scott and Metalheadz in their heyday. Distributed by Hardwax, pressed on stamped white labels and presented with the scantest information regarding their provenance, the QNS material sounds as Berlin dnb ought to: spacious in sound design, righteously dub-infused and decidedly underground in character as well as application.

Felix isn’t one to rest on his laurels, however, either as producer or label manager. Having recently released the sixth and seemingly final instalment in the QNS series, he’s about to inaugurate Hidden Hawaii’s Solaris Series, which will be comprised of three separate 10″ releases.

“It consists of work by six different artists but it will not be about any names,” Felix tells us over email. “It’s going be released via Hardwax soon, and is about six different tunes somewhere between electronica,  jungle and techno.

“After that on Hidden Hawaii there will be two 12″s. The first one with laidback tunes from Martsman and DB1, the second one with abstract tracks from AnD from Horizontal Ground camp.

As well as unloading four QNS 12″s in 2010, Felix also released one of that year’s finest dnb 12″s under his own name, ‘Recognition’/’Ice’ for Doc Scott’s 31 Records, and 2011 will see him continue to contribute to other labels’ catalogues. ‘Beaten Track’ is forthcoming on Commix’s labels, with a five-track EP planned for Alphacut offshoot Drop and a further single for Apex Records.

“I hope to get some more tracks finished this year but I’m slow as hell at the moment,” he concludes. “Many of the tunes I’ve spoken about are to be found in this mix. But a tracklist is not provided.”

FACT mix 242 showcases the full range and depth of the Felix K aesthetic, swelling patiently out of deep, undulating techno and Rhythm & Sound-esque dubscapes into the kind of stripped-back, shark-eyed junglism with which he’s made his name. Whether or not you’re familiar with the man, we urge you to check this out – it’s just superb.