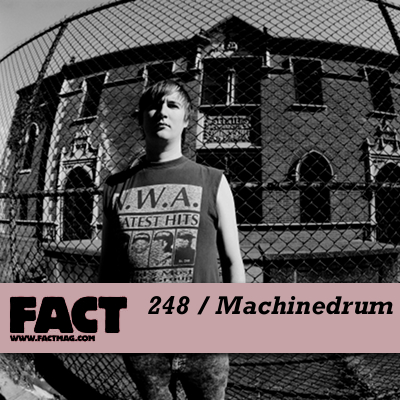 Real name Travis Stewart, Machinedrum has been a staple in New York’s underground since the early part of the last decade, when his debut album Now You Know (2001) was released on Miami’s Merck Records. In the years since, which have seen him release another eight full-lengths as well as myriad singles and mixtapes, Machinedrum has explored countless forms of dance music, hip-hop and more, as well as the extremes of both analog and digital musical forms.

Last year, Stewart turned to Glasgow’s LuckyMe collective – a stable of artists who have always openly revered Machinedrum’s music – to release his Many Faces EP, while also exploring contemporary house music and dubstep, collaborating with Praveen Sharma as Sepalcure for a series of records on Hotflush.

Next month, Planet Mu will release Room(s), a new Machinedrum full-length with ambient jungle and Chicago footwork as key reference points. The focus of Room(s) is on immediacy, with tracks mostly composed while traveling, then later finished in the studio, with the notion in mind that great moments of inspiration are fleeting, and should be seized upon and “squeezed” for all their worth.

Machinedrum’s long overdue FACT mix centres around the footwork and jungle that inspires Room(s), with Planet Mu material from DJ Diamond, DJ Spinn and Chrissy Murderbot, Philip D. Kick and Distal’s individual takes on juke and footwork, and jungle from Roni Size & Reprazent. There’s also unreleased material from Machinedrum, FaltyDL, Eprom and XI, so dig in, and turn the page for a short interview with Stewart about the new album and more. Oh, and be sure to catch Machinedrum at the Glade Festival on June 10-12.

The approach you’ve taken to Room(s) is pretty interesting, squeezing brief moments of inspiration for all they’re worth. How long, typically, did you spend on the song son the album, and how often did you go back to them?

“Most of the writing and recording happened in the first session which lasted anywhere from three to six hours.  I would then some time soon after have an arranging session where I took the recordings and sequences that I wrote and more or less formed a song out of them.  Then one more session for mixing and the tune was wrapped up.”

Did you find it quite a natural way of working, or did you have to regiment yourself, like ‘right, time to stop tweaking this and move on to the next one’. I guess you work quite quickly as it is, given how prolific you’ve generally been.

“It was very natural.  I basically work on a 16-32 bar loop until there are so many layers that its impossible to add anything else.  At that point I either start arranging, move on to a new track or just take a break in general.”

How do you think the record would have been different if you’d not taken this approach? There’s a lot of very natural reverb and crackle to it, which sounds great and I’m guessing is a result of how you worked on it.

“The most obvious difference would be how long it took for the record to come out.  I started the first tune for Room(s), ‘Now You Kno Tha Deal 4 Real’ in Berlin, June 2010, and only a year later it gets released. It’s probably the quickest turnaround I’ve ever had with any of my albums.  There are a few tracks I wrote in 2011 only a few weeks before they got mastered!  If I had constantly reworked and refined the songs I think there would be more twists and turns in the tunes that probably would have distracted from the original point when I first sat down to write it.  I ended up using similar processing and FX for the vocals and instruments as a result which definitely added to the connective nature of the songs.”

Given the fact that you made a lot of it travelling, is it all done on laptop?

“Yes, on my Macbook Pro, almost entirely on Ableton Live except for a few melody lines written in old school Impulse Tracker.”

The press release for Room(s) makes quite a big deal of how much it draws from footwork. Has that stuff been a big inspiration in the last year/eighteen months?

“Definitely.  I’ve been listening to DJ Nate since he was selling ‘Personal Traks for 25$’ on his MySpace in 06-07.  I had always joked about Footwork getting released on a label like Warp or something, and then of course Planet Mu makes that dream a reality, as they tend to do with young genres.  Theres a lot of influences that go in to Room(s) but footwork definitely opened me up to working with faster tempos that still exist within the framework of a hi-phop sounding track.”

What particular artists? Tracks like ‘Lay Me Down’ definitely sound like an extension of the sort of sad, distant stuff that DJ Elmoe does.

“Nate, Roc, Rashad, Earl, Elmoe, Diamond – all the Chicago dudes are doin’ it in their own way and I love it.  I’m really loving these cats like Philip D Kick and Distal who are flippin rave/jungle tunes into dopr footwork/juke jams.”

Ambient jungle seems to be another big thing on Room(s), from listening to it… really fast club music washed in watercolour.

“Yeah I’ve always been in to Jungle from back in the 90s when I first started getting into electronic music. It was only natural that I’d start working in these jungle breaks and atmospheres into the juke/footwork beats I’ve been experimenting with lately, since the majority of both exist at the same tempo (160-170).”

Was it quite nice to get back to solo stuff after I presume spending the majority of last year doing Sepalcure records/live shows?

“I’ve always been working on solo material amongst other projects so it’s not that different, but I am excited to work with Planet Mu and anxious to hear what people think about Room(s) when it comes out.”