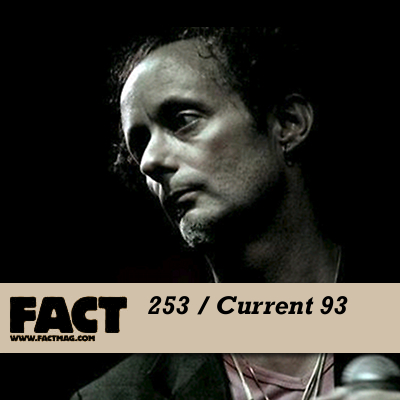 Strange things happen. And the strangest thing that’s happened to us in a long time is Current 93‘s FACT mix.

Yes, that’s right, FACT mix 253 is by David Tibet, founder and sole constant member of hallucinatory rock institution C93. For those of you unfamiliar with the group and their work, allow us to attempt a futile summary.

The band – if that’s the right word  -was born out of the industrial scene of the early 1980s, in which Tibet had been a face for some time, both with his own project Dog’s Blood Order and also as a member of 23 Skidoo and Genesis P.Orridge’s Psychic TV. Aided and abetted by Nurse With Wound‘s Steven Stapleton (who has played on nearly all C93 releases since), Tibet embarked on “phase one” of C93 in ’82, developing a unique blend of synth-assisted drone, tape loops, ritualistic vocals and industrial noise which culminated in the incantatory 1983 single ‘LAShTAL’ and 1984’s gothic masterpiece Dogs Blood Rising. The impact of these records can still be felt today in the work of such artists as Kevin Drumm, Raime, The Haxan Cloak, Sunn O)) and Prurient, to name but a few.

1986 saw a sea change in the C93 sound, the band turning their attentions to an “apocalyptic folk” sound, characterised by acoustic guitars and Tibet’s distinctive voice, which flits between a creepy nursery rhyme sweetness and an excoriating, atonal yowl.

“I felt I was moving away from the most important thing, which was the centrality of emotion, of trying to get across what I was feeling,” Tibet would later tell The Wire‘s David Keenan. “It had become too formularised, I needed to return to what moved me, which was nursery rhymes and folk music. Not folk rock, just really simple unadorned melodies, maybe no choruses, just direct, a minute or two long.”

Simple, yes, but not without content. The new musical direction reflected the singer’s long-standing infatuation with the The Incredible String Band, Comus, Sand and Paul Giovanni’s music for The Wicker Man, as well as religious music and more traditional folk song, while his profanely poetic lyrics were increasingly coloured by his preoccupations with death, Christianity, Tibetan Buddhism, Gnosticism, runes and occult influences of various kinds, not to mention the writings of William Blake, Thomas Ligotti, Arthur Machen and M.R. James among others. Tibet, it would seem, is a man who pursues his interests to the absolute hilt.

“I was obsessed with Noddy,” he recalls, in reference to the C93 album Swastikas For Noddy. “I took a load of acid on the top of the house where Rose McDowall was living and I had a vision of Noddy crucified in the sky and it really impressed me… as you would expect.

“The next day I just went mad for buying Noddy. Before I’d seen him crucified I wasn’t any more interested in him than any other kid who’s read Noddy as a child. I was taking such a huge amount of speed at the time that I had a massive amount of energy so I just started hoovering around and would come back with bin-liners full of anything with Noddy on. Rugs, mugs, jugs, didn’t matter, bought it all, to the extent that I started wandering around London wearing a red Noddy hat with a bell on the end. Which was possibly not a good move to make in terms of fashion…”

Current 93 have continued to work in the visionary folk idiom ever since the mid-80s, evolving and refining their aesthetic  across literally dozens of LPs and collaborating extensively with other artists along the way – including Björk, Nick Cave, Coil‘s Jhon Balance, Will Oldham, Om and Andrew WK. Recent albums include Aleph At Hallucinatory Mountain (2009), which betrayed a doom metal influence and featured vocals from Rickie Lee Jones and Sasha Grey, Baalstorm, Sing Omega (2010), which boasted James Blackshaw on guitar and vocals,  and most recently Honeysuckle AEons, released earlier in 2011. Meanwhile Tibet’s Durtro label, founded in 1992, has provided a home for the likes of Antony & The Johnsons (long before the mainstream paid any attention), Baby Dee, Charlemagne Palestine and legendary trad folk songbirds Shirley and Dolly Collins.

And so to Current 93’s FACT mix. Well, it’s certainly as characterful, considered and darkly humorous a selection as we’d expect from Tibet. We can say outright that it’s the first and probably last FACT mix that will include an Andrew Lloyd-Webber composition (‘Pilate’s Dream’, from Jesus Christ Superstar), not to mention Kiss and Judas Priest. But in the main this selection seems to be a celebration of singular and daring vocalists – from Blind Willie Johnson to Karen Dalton, Shirley Collins to Gil Scott-Heron. Further analysis or explanation seems pointless – we suggest that you simply download and give it a listen. The mix, like Current 93’s career since 1986, is about the direct and transformative power of song, and the playful but passionate, ongoing search for what Tibet calls (after Arthur Machen) “the inmost light”.