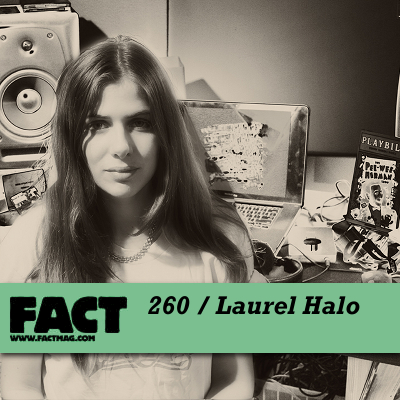 We’ve had a keen eye on Laurel Halo since last year’s King Felix, a promising four-track EP originally released for free and later granted a full release by Hippos in Tanks.

This year, the Ann Arbor-born producer and vocalist has really started to fulfill that promise. Antenna, a recent cassette release saw Halo indulge the more ambient side of her tastes, while Hour Logic, a new vinyl EP for Hippos in Tanks, represents Halo’s best work to date. With the vocals less at the forefront than before (often non-present, in fact), Halo’s Michigan background really gets its time to shine, ghostly overpasses of Detroit techno and electro painted in the sky. At first glance some of Hour Logic‘s tracks could appear freeform due to the way they frequently dissolve, often reforming when you least expect them to, but there’s always some sort of constant, often a particularly un-obvious groove, that keeps it dancefloor.

As well as an accomplished live performer, Laurel’s an excellent DJ. Her FACT mix, titled ‘Pornoviewer’ after the Dopplereffekt classic, features Jeru the Damaja, VHS Head, Two Lone Swordsmen, Eric Copeland, Araabmuzik and more, and flows like few others could. Enjoy.