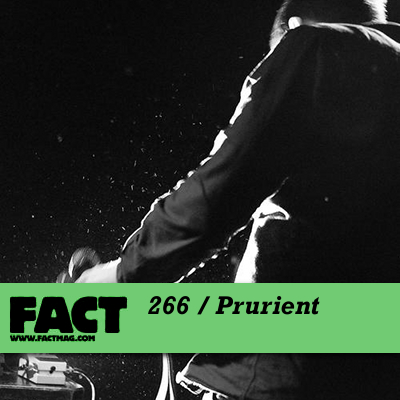 When we first started the FACT mix series a couple of years back, it’s fair to say that Dominick Fernow was one of the last people we expected to one day contribute to it. Though long avowed fans of his work not just as Prurient but as a member of such groups as Ash Pool, Nihilist Assault Group and Vegas Martyr, in truth we considered his brand of harsh noise and noxious power electronics to exist at some remove from the FACT universe.

In recent years, though, Fernow’s lifelong but generally submerged interest in those strains of electronic-oriented music more familiar to us – techno, EBM, synth-pop and industrial – has come bubbling to the fore. The tapes he released last year as Vatican Shadow – Kneel Before Religious Icons and Byzantine Private CIA – represented his first forays into beat-driven music, and presaged the “new” direction that he’s adopted for the latest Prurient album (of which more later). His friendship with Wes Eisold has also played a substantial role: after releasing Eisold’s Cold Cave 7″ ‘Painted Nails’, he began touring with and occasionally collaborating with the band (yielding, among other things, the superb Stars Explode cassette and subsequent 12″ of groaning post-industrial ambient), before becoming a permanent member.

“I thought Cold Cave was great,” he told FACT in a recent in-depth interview. “Because as a fan of electronic music, a fan of noise, and a fan of industrial, it felt like something that was addressing all of those things together.”

The same can be said of the new Prurient album, Bermuda Drain. Out this week on Hydra Head Records, it’s arguably Fernow’s finest recorded statement to date, and certainly the most diverse and vividly realised. In a move that will no doubt rankle with fans of his P.E. work, it dispenses almost entirely with “noise” in the strict sense of the word, favouring instead something approaching song structure and a kind brooding, electronic pulsation that’s strongly influenced by long car journeys spent listening to techno – FUSE, Sandwell District, Plastikman, Aphex Twin and so on – while on tour in Europe with Cold Cave.

Of course, Bermuda Drain wouldn’t be a Prurient record without a good dose of pain, and there’s plenty of that splashing around beneath those newly shiny surfaces: from the shouty, synthesized metal progressions of ‘A Meal Can Be Made’ to the gorily cathartic incantation of ‘Palm Tree Corpse’, Fernow still know hows to do harrowing. What’s more, his voice occupies centre-stage – shorn of his customary distortion, it’s an arrestingly honest and exposed performance, the sound of an artist laying himself bare.

We asked Fernow to create a FACT mix showcasing some of the recent techno and electronic music that had inspired him and the conception of Bermuda Drain, making explicit its links to the kind of industrial and noise gear that he’s long been associated with. He duly obliged with an incredible 2-hour selection which takes in tracks on his own Hospital Productions label from the likes of Contrepoison, Burning Star Core, Alberich, Lussuria and Vatican Shadow, mosquito-plagued ethno-dread from Shackleton and his beloved Muslimgauze, operatic EBM from Suicide Commando and moody, minimal and industrial techno from Sandwell District‘s Function, Traversable Wormhole and Regis & Female (a classic Downwards cut). There’s room also for the African percussion assault of William Bennett’s Cut Hands, electro-physics from Dopplereffekt, and even the raw demo version of Nine Inch Nails‘ ‘Heresy’.  You couldn’t ask for a fuller or more provocative illustration of where Dominick Fernow is as an artist right now, and the route he’s taken to get there.

“I don’t consider Prurient to be music,” he concludes. “It’s more like a collage project. It’s me reassembling and reappropriating and recontextualising anything that fits the mood of negativity.”