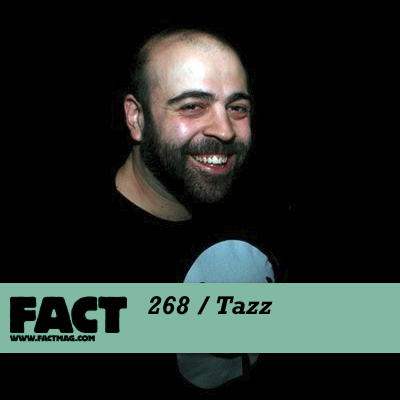 This Monday’s FACT mix is a steamrolling house session by Montreal’s Tazz.

A staple of Montreal’s club scene, Tazz has – according to a recent interview with Little White Earbuds, anyway – been DJing for over 15 years, but it was only last year that he released his first record, after booking Chicago house stalwart Jus Ed and sending him some tracks. Ed was smitten, and released Tazz’s ‘Acid Love’, a bumping deep house epic that instantly pricked up FACT’s collective ear.

Tazz has released three singles since ‘Acid Love’, and he seems to improve with each one. The experience that he picked up producing tracks for himself, close friends and his hard-drive particularly comes through on his recent series of ‘Underground’ tracks: masterpieces in dusty jacking house and techno, produced with a slight of hand that lends them a perfect balance between heavy-duty professionalism and a certain naive exuberence.

His FACT mix is every bit as masterful as his recent 12″s; one of the best house producers to emerge in the past two years in full control.