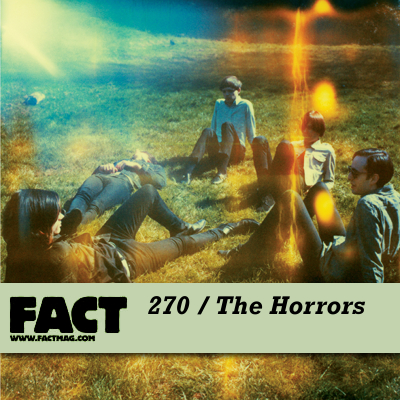 Growing up in public is tough, but the London five-piece have gone about doing so with dignity, maturing way beyond the promising but fundamentally underwritten and overblown bouffant-gothisms of their 2007 debut album to strike a rich vein of brawny but windswept psychedelic rock on 2009’s Primary Colours, one that they’ve tapped again for this year’s extraordinary Skying (XL Recordings).

An antidote to the meager spiritual ambition of so much post-internet guitar music, Skying sounds like a genuine attempt to boot down the doors of perception: not for nothing have critics been drawing comparisons to The Stones Roses, early Primal Scream, Spacemen 3 and The Verve’s magisterial A Storm In Heaven. Skying is steeped in tradition and an intimate knowledge of musics past, but at its heart is a palpable, gloriously unfashionable belief that these songs might just save your life, and theirs. As its title suggests, Faris Badwan, Tom Furse, Spider Webb, Coffin Joe and Joshua Von Grimm are looking up.

A lot of bands who enjoy the Horrors-level success stop listening to other people’s records. But these boys are music-lovers, and their tastes are catholic and ever-evolving: take for example Faris’s recent Cat’s Eyes album, with its unlikely basis in Morricone, obscure giallo soundtracks and opera, or Furse and Webb’s Delia Derbyshire and Raymond Scott-influenced Spider & The Flies project. Even some of their slightly misguided ventures, like their necessarily short-lived bleep techno clubnight Wispa, suggest a group refreshingly eager to explore paths less well-trodden.

It’s Furse who has put together The Horrors’ beautifully selected and sequenced FACT mix. T.2‘S labyrinthine Decca obscurity ‘No More White Horses’ sets the tone, being a beguiling synthesis of macho axe heroism and eerie atmospherics, swelling to an almost symphonic climax, replete with horn fanfare and hectic drum fills that would’ve blown the roof of The Old Grey Whistle Test; from there on in it’s a journey through rock’s darker, trippier back pages – touching on the cocaine-numb country-rock romanticism of Gene Clark, the sleazy art-glam of Roxy Music‘s ‘In Every Dream Home A Heartache’, David Essex‘s million-selling 1973 single ‘Rock On’, and classics from The Beach Boys and The Velvets through to the outlandishly grooving prog of ‘The Four Horsemen’ by the Vangelis-helmed Aphrodite’s Child.

It’s not all shop-soiled 60s and 70s vinyl: there’s room too for Primal Scream‘s post-rave ambient odyssey ‘Inner Flight’, Tame Impala‘s magnificent ‘Desire Be, Desire Go’, the neo-Meekisms of Connan Mockasin, and Stereolab‘s oscillator-pop epic ‘Metronomic Underground’ – not only do these more contemporary offerings provide some of the mix’s most thrilling moments, they also serve to highlight the inventiveness of the older material – placed next to a cut from Screamadelica, US69‘s ‘2069: A Spaced Oddity’ sounds no less futuristic or otherworldly, perhaps more so.

The Horrors’ mix, subtitled It’s Just A Rumour, couldn’t really come at a better time – not only are the band at the height of their creative powers, the songs that Tom has chosen lend themselves perfectly to high summer in Albion. Rest assured, if we didn’t have work to do, we’d be out mushroom-picking and lolling in the sunshine with FACT mix 270 as our soundtrack.

Speaking of lolling in the sunshine, you can catch the band play live at the Field Day festival in London’s Victoria Park this Saturday, 6 August.