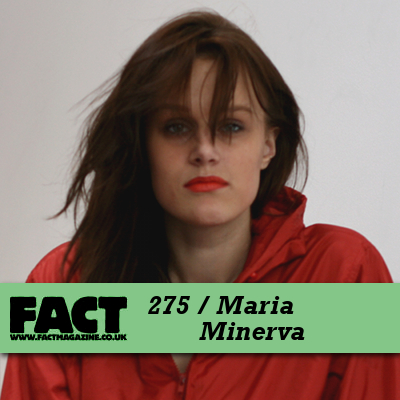 Minerva first appeared on our radar when her Tallinn At Dawn tape emerged last year; ‘Noble Savage’ on 100% Silk, Amanda Brown’s 12″ dance imprint, followed (seek it out for the quite brilliant ‘Disko Bliss’). The new album delivers on her early promise, and demonstrates the breadth of her interests – ‘Kyrie Eleison’, for us the album’s highlight, is a dub-savvy, gothic electro-pop the likes of which we’ve never heard, all stomping kickdrums, rising synth pads and Maria’s breathy vocals pushed and pulled hrough a vast tunnel of reverb. The music of Minerva is, yes, very self-aware, very meta, but it’s also beautifully crafted, and works sincerely in its own right – it really is catchy as hell, and you can actually dance to it.

“When you can deconstruct the music of others so easily, and your own, then it’s kinda hard to make it at the same time,” Maria, who came to London from her native Estonia to take up a Master’s in Aural & Visual Culture at Goldsmith’s, recently told Altered Zones. “But this sounds annoying only in theory; in practice, it’s something you can actually forget about. Because the best thing about music is that it’s beyond words. It’s on the level of sensations, and it’s very easy to forget everything I’ve learned when I’m listening to or making music. That’s why I love it so much.”

Which brings us to FACT mix 275, subtitled Living In Ecstasy, an intoxicating brew that operates very much “on the level of sensations” – taking in the skippy house of Ricky Rouge (another alter ego of A Guy Called Gerald), the priapic boogie of Mexican Summer’s Part Time, the ‘Moments In Love’-sampling rollage of Summer Junkies ‘I’m Gonna Love You’, the dreamy Fonda Rae cut that gives the mix its subtitle, Juan Atkins‘ prismatic techno, and the queazy synthetic textures of Carter Tutti. You couldn’t ask for a better soundtrack to a hot summer’s day in London, or anywhere else for that matter.

Cabaret Cixous is out now; look out for a new 12″ on 100% Silk and a collaborative release with LA Vampires. Oh, and be sure to catch Maria performing live for BleeD at the Shacklewell Arms in London this coming Monday, 22 August, with support from Mordant Music’s Vindicatrix. More information and tickets here.