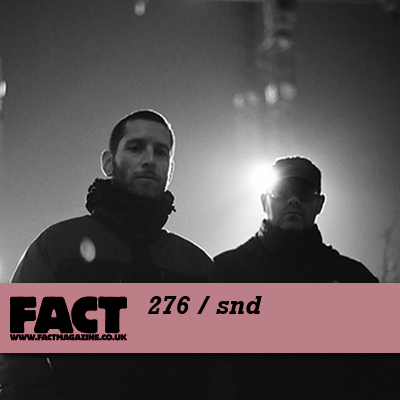 It’s difficult to adequately convey our excitement about this. Mat Steel and Mark Fell began their collaboration as snd in 1998, and over the last 13 years they’ve cultivated one of the most singular and compelling bodies of work in the history of post-rave electronic music. Their most arresting works have invariably been their self-released 12″s and EPs, the first of which was ’98’s ‘Tplay’, the most recent 2008’s 4, 5, 6, but they’ve also released four albums to date, all quite remarkable: Cassette (1999), Stdio (2000) and Tenderlove (2002) on Mille Plateaux, Atavism (2009) on Raster-Noton. Digital minimalists of the most exacting and uncompromising kind, the duo don’t make dance music by any stretch of the imagination, though their records often reveal an awareness of, and an abstract engagement with, the imperatives of the club: behold the spidery avant-garage rhythms that characterise 4, 5, 6, or the opalescent techno synth shapes found all over Atavism.

The duo formed in Sheffield after meeting at art school, bonding over their shared love of house, techno and experimental music, and moreover their appreciation of the “highly focussed” label aesthetics of Wolfgang Voigt’s Studio 1 and Thomas Brinkmann’s Max Ernst. Determined to create a similarly steely, unyielding context for their own work, they began releasing 12″s on their own eponymous imprint, beginning with the aforementioned ‘Tplay’, which was packaged in the most opaque fashion imaginable, with no information on it save for a contact telephone number. After hearing Baby Ford play the 12″ out, Mille Plateaux owner Achim Szepanski called the number, beginning a relationship which would lead to the release of the aforementioned trilogy of LPs.

Following the release of Tenderlove, they began to spread their wings, making incursions into the art world as curators and artists both, instigating their Blir side project, remixing Ryuichi Sakamoto, fulfilling sound design commissions and playing live around the world, including a tour in support of Autechre (they reprised this relationship again in 2008). In their own words, their live performances “can be alienating, engaging, dynamic and engaging; each event a unique exploration of the relationship between performer, audience, software and context.”

When they returned in 2008 with the limited edition triple-pack 4,5,6, it sold out virtually overnight; Atavism followed soon a year later. Over the past two years the duo have been concentrating largely on solo ventures. Fell has been the most visible of the two, releasing the audio-visual work Attack On Silence (Line, 2008) and three albums in quick succession: UL8 (Editions Mego, 2010), Multistability (Raster-Noton, 2010) and Manitutshu, the latter composed from sounds that Fell had developed for use as presets in Errorsmith‘s recently unveiled synth for Native Instruments (they were rejected by NI at the last minute). ‘Kubu’/’Zikir’, a 12″ collaboration with Mego boss Peter Rehberg, was released just last week.

Their FACT mix is as authoritative and illuminating as you’d expect, exploring the full gamut of minimalism: from the work of such august artists as Morton Feldman and Catherine Christer Hennix through to the post-punk textures of Dome (Wire’s Bruce Gilbert and Graham Lewis), via the ascetic drones of Eleh, the digital cut-ups of Oval, and Detroit techno both soaring (Carl Craig‘s Psyche track ‘Andromeda’) and punishing (Robert Hood‘s ‘Minus’) – that’s to speak only of the stuff that’s immediately familiar to us (be sure to click on the links in the tracklist for more information on each release). For those of you interested in electronic music at its most radical and reduced, Christmas has come early.