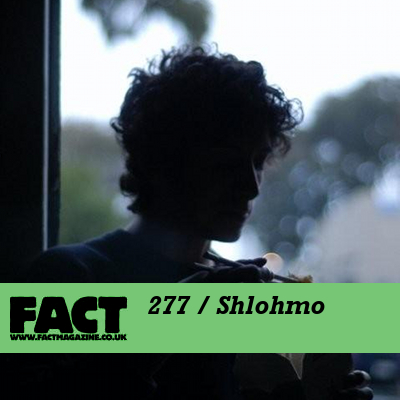 We’re not gonna lie, when we first heard Shlohmo at FACT, we kind of presumed he was just another one of those LA beat guys (read his below response to our question about this for why this probably makes us bad people). We were wrong.

This year’s ‘Places’ single, a stunning walk through rustic dream-woods, contained all the distant beauty and underlying malevolence of classic Boards of Canada, and the album that followed, Bad Vibes, proved that it was no one-off. A more diverse listen, it was nonetheless bound together by a bittersweet richness that defined the album and elevated it beyond the work of his supposed peers. We were also big fans of his edits of Drake’s ‘Marvin’s Room’ and Burial’s ‘Shell of Light’ that preceded it.

Shlohmo’s FACT mix is, frankly, sublime. In terms of genre, it’s all over the shop – from slowed-down edits of Tears for Fears, Clipse and Monica to Tom Waits and Charles Manson – but like Bad Vibes, it flows miraculously well, and feels cohesive in the face of diversity. We really can’t recommend it highly enough.

So you just released Bad Vibes, which isn’t your first full-length but does feel very much like your first proper album, if you know what we mean. How long in the making has it been?

“Well I dunno what you would consider a full length album, but I didn’t really think of any of those little EP things in the past as full-lengths. Like “Shlomoshun Deluxe” only had eight tracks and a few remixes, and that was the longest release before Bad Vibes. Regardless of length though, I would definitely agree that this felt like the first proper album, and that’s why we chose to present it as such. ButI  think I had been working on it for a little less than year.”

Your ‘Places’ single from earlier this year appeared again on Bad Vibes – when that came out, it really felt like you taking your sound to that next level for us. Was it a big step for you? Did it go on to inform the album in any way?

“That track came about in the midst of recording all the other album tracks, so they all kind of informed each other if that makes sense. We chose that as the single after all the songs had been turned in, and the other songs on the single EP were things that I was still passionate about, but didn’t really belong on the album. But I don’t really know if it felt like a big step for me, it happened more naturally than that. I just knew that I wanted to record audio. Guitar and vocals and shit.”

Is there any unifying theme to the album that emerged while you were making it? There’s a few different styles there, but overall it does feel part of one big piece, and quite coherent.

“The process felt more like keeping a journal than creating an album. So I think it’s probably coherent because it’s really just a musically translated version of the bummer shit in my head from those months of recording. I don’t think I really saw any real theme while making it, I was kinda just trying to get some shit off my chest to feel sane.”

You’ve managed to carve out quite an increasingly recognizable aesthetic which is a little itchier and sharper than a lot of the L.A. stuff you probably get associated with. Are you quite conscious of having to stand out when there are so many peddling that whole L.A. beatmaker style right now?

“I don’t think it’s ever been my intention to stick to one thing. And I definitely don’t feel pressured by style. I just make what I want at the time and it sounds how it sounds. I think a lot of people when listening to music like to profile an artist and keep it within a certain boundary for themselves, because it’s comforting to know that that artist will always represent that or be there for you in that specific way. Which is funny, because I think the majority of creative people tend to explore and change and grow constantly. It’s frustrating and stupid for me to remain stagnant in something for too long. But people still like to hang on to that original association. You know, I didn’t make this record with much of the LA beat scene in mind, and to me it doesn’t have very much to do with it other than that it’s electronic music and I’m still from Los Angeles. Which is why I find it so funny how many reviewers and shit I’ve seen calling it “wonky” or whatever – that term needs to R.I.P. immediately. I think that’s a huge testament to people’s need for sameness and definition in music.”

“It’s pretty much just a list of music I had been listening to a lot while I was putting this together. I listen to a lot of different shit, so it’s kind of all over the place, both in genre and in sound quality. There’s some old shitty 64kpbs mp3s, some found cassettes, some broken cassettes, some music by friends, some Charles Manson, some screwed and chopped, you get it all.”
Tags: Shlohmo
TOP TRENDING MUSIC