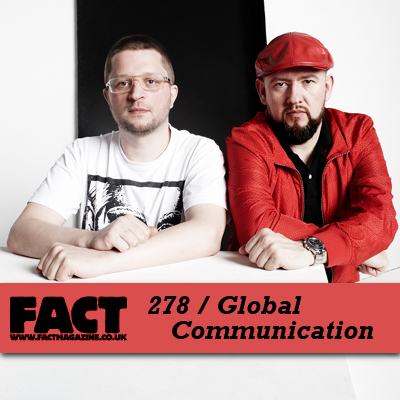 FACT mix 278 is by Global Communication.

It’s a warm, immersive selection comprised entirely of their own work – as GC and also such aliases as Jedi Knights, Secret Ingredients and Reload – and it takes in deep techno, low-slung hip-hop, sinewy sci-fi electro, ambient jungle and other vectors into the unknown. Having reunited this year after a long hiatus, the duo of Mark Pritchard and Tom Middleton is rightfully and righteously reasserting its status as one of the most vital and multi-faceted production units to come out of the rave era.

Classically-trained Tom Middleton came of age in Cornwall, where he fell under the influence of Richard D. James and plunged headlong into the world of electronic music, even co-producing a track (as Schizophrenia) on Aphex Twin‘s Analogue Bubblebath EP. In 1991 he met DJ Mark Pritchard, beginning a creative association that has lasted more than 20 years.

Of course GC are best known for their 1994 debut album 76:14, a landmark in British electronic music that helped define the sound of “chill out” even as it effortlessly outclassed the rest of the field. Middleton and Pritchard’s vision of ambient music was as something sensual and lavishly melodic, but also restrained and refined, shorn of the cheap hippie signifiers synonymous with the era. 76:14 is no mere comedown album, it’s rich and numinous and multiplex. The world its sighing synthetic tones evoke is no blemish-free utopia; there’s a deep melancholy to it, a nostalgia for things that have passed by and are now irrecoverable, and this is all the more noticeable, and all the more moving, when listened to now, some 17 years later. It’s an album that deserves to be spoken of in the same breath as Aphex’s Selected Ambient Works 85-92 and Autechre’s Incunabula.

But of course 76:14 is just a part, albeit the central part, of Pritchard and Middleton’s legacy. If you’ve never heard Pentamerous Metamorphosis, the pair’s epic five-track reinvention of the Blood Music LP by shoegaze middleweights Chapterhouse, then it’s warmly recommended. Reload, originally a Pritchard solo project before Middleton joined its ranks, gave us a fine run of deep, expressive techno records, most notably the jaw-dropping A Collection Of Short Stories, which was included in FACT’s choice of the 20 Best UK Techno records ever made. With the short-lived Secret Ingredients they produced some wonderfully moody, jacking house records, while Jedi Knights was the umbrella under which they presented their own exploratory take on hip-hop and breakbeats – the album New School Science has been cited as an influence by Daft Punk, The Prodigy and The Chemical Brothers among others. There are countless other Pritchard and Middleton aliases – some represented in their FACT mix, like the ambient drum ‘n bass project Chameleon, others not, like Pritchard’s Link, whose 2001 track ‘Amenity’ was recently declared by none other than Richie Hawtin to be the last song he’d like to hear before departing this mortal coil.

As most of you will know, Middleton and Pritchard have hardly been quiet in the years since the release of the classic GC and Reload fare. Middleton has made music as Cosmos, Mod Wheel and Amba, while Pritchard has been particularly visible of late thanks to his interventions in dubstep and its tributaries, including own-name releases on Hyperdub and Deep Medi Musik, and albums for Warp Records as Africa Hitech (with Steve Spacek) and Harmonic 313 (which evolved out of his and Dave Brinkworth’s mid-noughties, retro-experimental electronics project Harmonic 33).

Right now, though the focus is back on Global Communication, and particularly its live incarnation. On Saturday 10 September, We Fear Silence at Cable in London plays host to Tom Middleton and Mark Pritchard present Global Communication – for this one night only, the pair will play not only as GC but as Reload, Jedi Knights, Link, E621, Secret Ingredients and Chameleon, all within a continuous 6-hour live/DJ set that promises “old favourites deconstructed, reconstructed and redefined for today’s dancefloor”. You don’t want this miss this one, to be quite honest, so for more information and tickets click here.

What about new recorded material from the duo? Well, do know that Global Communication are teaming up with The Vinyl Factory to release a series of limited edition vinyl releases this Autumn, including remixes by Lone and Photek alongside their own new edits of classic GC tracks. Keep eyes and ears peeled for those; we’ll let you know when we have more details.

Until then, dig into FACT mix 268, the perfect soundtrack to late August, that beautiful, frightening moment when the finite nature of summer suddenly becomes clear. Rage against the dying of the light, people, and listen to this while you’re doing it.