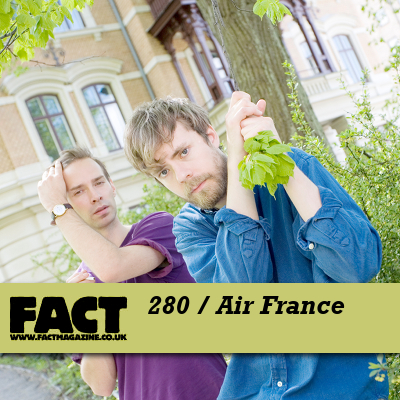 Rare, in fact, is an understatement when it comes to these two: transmissions from Joel Karlsson and Henrik Markstedt have been notably thin on the ground since their 2006 debut, On Trade Winds. The pair have only released two physical records to date, following said debut EP with 2008’s six-track No Way Down (both were originally released through Swedish label Sincerely Yours, but later were packaged together and reissued by Rough Trade). Sample-based records that lingered like the faded afterthoughts of Balearic summers, they represent two of the most distinctive EPs of the last decade, predicting the waves of chillwave and hypnagogic pop music that would follow them while never being bettered.

Since then, there’s been two digital singles, 2009’s ‘GBG Belongs to Us’ and ‘It Feels Good to Be Around You’, a stunning drum machine-driven ballad released last month. Air France’s debut album, beyond long-awaited at this point, is roughly scheduled for a release this year, but whether it’ll actually materalise or not is anybody’s guess. That’s half the fun with these guys.

What we do know is that we’ve persuaded them to contribute a mix to our series. In the words of the group, “it’s September soon, and it may be audiable in the mix. It’s a beautiful month, but also a month of changes, both good and bad, you know?”. Clams Casino, Holy Other and at least one unheard Air France track feature in a mix that picks out the perfect middle ground between dance music and pop.