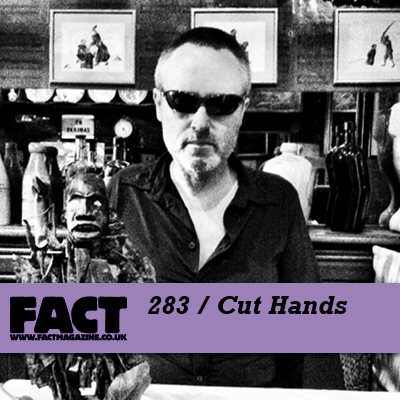 Cut Hands is the latest incarnation of William Bennett, founder of Whitehouse, notorious purveyors of extreme electronic music. Bennett formed the project in 1980, following a stint as guitarist in Essential Logic and subsequent solo recordings as Come (featuring contributions from Daniel Miller and J.G. Thirlwell). Having long dreamed of a creating “a sound that could bludgeon an audience into submission”, he made that dream a reality in Whitehouse, whose brutal, reductionist and flagrantly atonal music is characterised by bowel-loosening bass tones, ear-shredding high frequencies, showerings of white noise and hectoring, venomous vocals, usually barked, often screamed.

Initially releasing on his Bennett’s Come Organisation label, Whitehouse – the second longest-serving member of which is Philip Best, who joined the group in 1982, aged just 14 – became known not just for the force and fearsomeness of their sonic battery, but for the controversial language and imagery in which it was couched. Over the course of the 80s and 90s they became firmly established as one of the most important and subversive groups in the British underground, performing numerous “live aktions” to crowds of often dubious constituency, refusing to explain away or apologise for their use of transgressive material, and unloading such memorably toxic albums as Birthdeath Experience, Total Sex and Erector.

Whitehouse’s vast body of recorded work has proved influential not just on “power electronics” (a term coined by Bennett in the sleevenotes to the Whitehouse album Psychopathia Sexualis, and subsequently used by others to classify the huge number of Whitehouse-derived groups), but also noise, techno and myriad other post-industrial strains – their fans include Surgeon, Prurient, Russell Haswell, Wolf Eyes, Peter Rehberg (Meg0) and Steve Albini, who produced a string of Whitehouse albums in the 1990s. But there’s many more strings to Bennett’s nail-studded bow, as anyone who’s heard him DJ italo and hi-NRG disco as DJ Benetti will attest.

Indeed, for all the intense focus of Whitehouse, Bennett has famously catholic – yet ruthlessly discerning – tastes in music, and is a record collector of considerable renown. His interests extend far beyond the electronic avant-garde (Alvin Lucier and Robert Ashley are particular favourites) – he has spoken many times before of his lifelong enthusiasms for Yoko Ono and John Coltrane, among others. In the last decade or so, though, it’s his interest in African and Haitian vaudou percussion that’s come to the fore, with djembe and doundoun drums cropping up in late Whitehouse albums like Bird Seed, Asceticists 2006 and especially their “last”, 2007’s Racket.

The interest in Africa can actually be traced back to Extreme Music From Africa, which came out on Bennett’s Susan Lawly label in 1997 – styled as a “compilation” of material by African artists such as Godfrey J Kola and Jonathan Azande, it’s safe to assume that most if not all of the music was made, or at the very least remodelled, by Bennett himself – and in its focus on swarming synth noise and densely packed, pseudo-tribal percussion it firmly anticipates the sound design and spirit of Cut Hands.

Cut Hands debut album, if that’s the right way to describe it, came out in Spring of this year. Entitled Afro Noise I, it includes a clutch of previously released Whitehouse tracks that marked the origins of the project, alongside several originals, painstakingly recorded in Edinburgh, London and New York over the last four years. Undoubtedly one of the albums of the year, it’s also easily the most accessible release in the Bennett oeuvre to date, while still managing to provoke and unsettle. Though it’s full of electronic interventions of varying subtlety, the star of the show is Bennett’s beloved African and vaudou percussion.

In a recent interview he explained the root of his interest: “In the mid-90s I saw a documentary on Haitian vaudou music, which fascinated me, especially seeing how they were able to make some of the most intense music with almost nothing: bits of metal, stones, simple djembe drums – certainly none of the technology that we’re addicted to here; from that moment on, I wanted to hear as much of this kind of sound as possible.”

As crucial to the afro noise aesthetic as the percussion and the electronics is an almost salacious preoccupation with the continent’s intense polarities of beauty and horror – to quote Bennett’s notes for Extreme Music From Africa, “the tyrants, the beautiful girls, the bizarre rituals, the tropical fruits, the pygmies, the guns, the mercenaries, the tribal wars, the unusual diseases, the abject poverty, the sumptuous riches, the widespread executions, the praetorian colonialists, the exotic wildlife.” Certainly the idea of afro noise as a genre seems to be catching on, if this year’s Force Publique Congo tapes on New York’s Hospital Productions label are anything to go by.

Though Cut Hands’ music is a very different beast to Whitehouse’s, its goal can be seen as similar: to transport the listener, to provoke a physical reaction, to “cut to pure human states”. Communication, in its broadest sense, is arguably the key theme running through Bennett’s work, something borne out by the existence of his experimental mass communication project Extralinguistic Sequencing, which premiered at Tate Britain in 2010, as well as his well-documented interest in linguistics, and his own theory of the transparent concession: “that great art functions by affecting us enough to elicit a meaningful response, not from what we consciously perceive, but through everything that we are unable to consciously notice, including the artwork itself.”

As Bennett prepares to embark on his most intensive phase of live touring yet as Cut Hands, including stops at Krakow’s Unsound festival and London’s Blackest Ever Black label night (with Regis, Raime and more), we thought it an opportune time for him to record a FACT mix for us. The Afro Noise I album is sold out on CD, but November will see the release of two vinyl editions incorporating all the CD material plus bonus tracks. Keep up to date here.

Bennett chose to compose the mix from purely African and Haitian percussion music, and offered the following note to accompany it:

“There’s a critical, almost paradoxical, difference between not having permission to do something, and not knowing fully why. Listening to these extraordinary African percussion pieces beyond their original intent and outside their original context, it’s noticeable how much power they still have to entrance thanks to how much of ourselves we increasingly allow ourselves to bring to the experience.

“The percussion I’ve selected here is, for the most part, of the most aggressively high energy kind. Perhaps a concession to my own blunted frustrated tastes or perhaps a consolation for not being there to experience it live. I’ve created it in the form of a continuous mix because what might first appear as irreverence, to me seems totally respectful to this music’s true intent and function. I want it to be a non-stop listening experience in order for these complex doun-doun and djembe polyrhythms to ably work their magic. You’ll be grateful for them and it.”