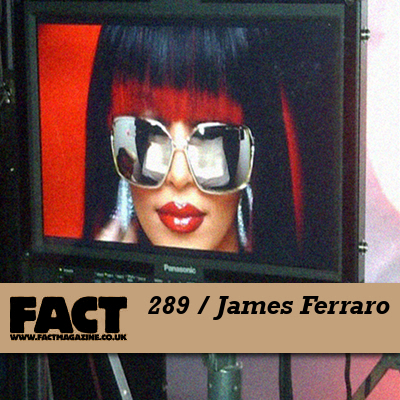 Arguably the most talked-about – certainly the most theorised – underground artist of the past two years, Ferraro has confounded and delighted in equal measure with a litany of cassette, CD-R and vinyl releases under a bewildering number of aliases. His cracked psychedelia credentials extend back to 2004 when her formed the Skaters with fellow fruitcake Spencer Clark, but it’s his gonzo solo music that’s brought him the widest acclaim: and what a diverse body of work it is, taking in the sun-spoiled, shop-soiled blues drift of Last American Hero, the eddying New Age ambient of Marble Surf, the cathode-ray paranoia of Citrac, the no-fi minimal wave of Chameleon Ballet, the AM rock perversion of Night Dolls With Hairspray, the VHS warp of Live At Slimer Beach and Rapture Adrenaline. Through a slyly humorous lens of Deleuzian theory and chaos magick, he focusses on the most vulgar and garish aspects of our recent cultural history: a hyperreality of advertising, self-help, porno, home fitness, speed-dieting, evangelism and fear-mongering.

On October 25 Ferraro releases his most anticipated album to date, Far Side Virtual, on Hippos In Tanks. Where much of his previous work has felt like a bricolage of 1990s half-memories, Far Side Virtual, on the face of it at least, attends to the fetishes of the late capitalism today: an iPad adorns its cover, and its track titles reference Google, Pixar, Starbucks, etc. It’s a radical departure from his previous work – there’s no distortion, no tape-hiss, no obvious underground signifiers. But long-time fans of his work needn’t despair, for this new cleanness and clarity to the Ferraro aesthetic hasn’t diminished the hallucinatory power of his music, and in fact may well have enhanced it: peppy keyboard-led tracks like ‘Tomorrow’s Baby Of The Year’, ‘Earth Minutes’ and ‘Adventures In Green Foot Printing’ will terrify you to the core even as they evoke the soundtrack of a third-tier Melanie Griffith rom-com or a forgotten Phil Collins B-side. Indeed, listening to FSV is like spending an hour with Patrick Bateman’s Walkman. More info on it here.

Ferraro’s FACT mix was always going to be a trip, and he hasn’t disappointed. He declined to provide a tracklist, the better for you to submit to its goofy, oneiric charms. As utterly ridiculous and utterly brilliant as the man himself, we strongly recommend you tune in. Download or stream via the SoundCloud player below.