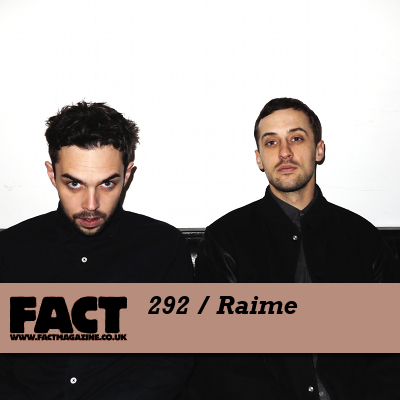 The London-based duo of Joe Andrews and Tom Halstead has only released two 12″s to date, but the substance of these records has earned them a hallowed reputation that many more prolific artists would kill for. They debuted last September with the Raime EP, a three-tracker of remarkable poise, richness and originality. Quoting from their diligently, discerningly amassed collection of late 70s and early 80s post-punk obscurities, they gave us the sighing ritualism of ‘Retread’, the lovelorn, undead swagger of ‘This Foundry’, the blasted-earth reconnaissance mission of ‘We Must Hunt Under The Wreckage Of Many Systems’. Industrial, techno, dubstep: various words were thrown at them and their music, but none seemed adequate, and none has really stuck.

The Raime EP was followed by a single, ‘If Anywhere was here he would know where we are’, which adopted a more minimalist tack than its predecessors, while keeping the fundamentals of the duo’s sonic identity intact: rolling drum patterns, melancholy synth tones, heavy bass and a below-surface roar of barely suppressed violence. On the flip, techno deity Regis supplied a remix of ‘This Foundry’ which has to rank among the finest of his career, having tackled head-on the source material’s equation of brutality and despondency. Raime are set to return early next month with a new 12″, entitled Hennail. The two tracks contained in its grooves, ‘Told And Collapsed’ and ‘You Will Lift Your Frame Clear’, find the producers in eloquent and assertive voice, pushing their sound further and further towards a kind of dance music for militant misanthropes.

It’s taken a certain amount of time and delicacy to coax them into recording a mix for us, despite, or perhaps because of, their affiliation to Blackest Ever Black, a label independently operated by FACT’s Kiran Sande. They’re a shy, and moreover a selective, pair. To date, Raime have created two mixes for public consumption, but in both instances these have been released as limited edition CD-Rs on Blackest. Their first (which you can download here), entitled You Can’t Hide Your Headcrack, was issued shortly ahead of their debut 12″ offering, and established links between their own music and that of passive-aggressive industrial and goth artists from the late 70s and early 80s. Though they weren’t too proud to drop some familiar names – their beloved Cabaret Voltaire and Ike Yard, for example – Headcrack was first and foremost an act of serious diggers’ devotion, and it’s tracklist was constituted largely by the (today) lesser-known likes of German Shepherds and Metabolist.

A second Raime mix, Living In The Gaps We Cannot Jump, was released as part of a hand-made double-disc set, again released as a limited edition through Blackest Ever Black (the centrepiece of the set being a 5.1 surround sound DVD that documents an installation they created for this year’s Unsound Festival New York, The Three Chambers Of Our Entities). This selection too situated itself firmly in the cold war years, with contributions from Experiments With Ice, Pink Military, The Klinik, Shoc Corridor and Nagamatzu.

But there’s something else that exerts an influence on Raime equal to, perhaps even in excess of, that of anything from the post-punk era: jungle. Jungle, particularly that made in ’94-’95, when the music was as rough-hewn as it was progressive, is an essential part of Raime’s make-up, and it’s also the focus of their FACT mix. Upon first hearing Raime’s own records, you might doubt the links to jungle, but the more you immerse yourself in their slender catalogue, the more obvious the similarities become: the absolute primacy of rolling drums, the sub-bass pressure, the cerebralism and the brute-force, the dynamism and the dread. Hell, you could argue that Raime’s music is a vision of how jungle might have sounded if it had embraced goth’s thorny romanticism and early industrial’s queasy bio-mechanics.

We can but speculate; all we know for sure is that Raime know their onions, and that their blistering FACT mix aims straight for the heart of the ’93-’95 sound, with one stretch into ’96. From the disorienting drum choppage of Dilijna to the rudeboy tearjerking of D’Cruze’s ‘Nightvision’ mix, via the none-more-debonair roll of The Truper, this mix isn’t some art-school misappropriation of the past, it’s a lean, mean love-letter to a future that never quite came to pass – but may still yet.

Download the mix below, and be sure to catch Raime live at the Basing House in London this Friday, 21 October, as part of Blackest Ever Black’s first label night. Also on the bill: Regis, William Bennett’s Cut Hands and very special secret guests. More information and tickets here. Raime’s Hennail is out early November on Blackest Ever Black.