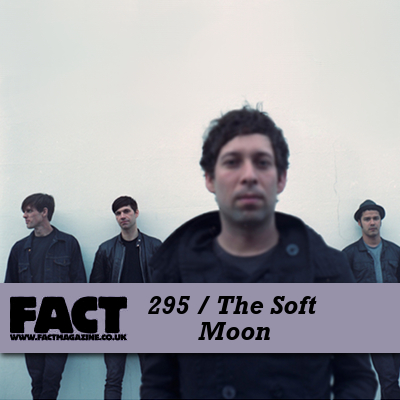 The brainchild of San Francisco-dweller Luis Vasquez, The Soft Moon has gradually evolved from a solo project into a fully-fledged four-piece band with a fearsome live reputation.

Their self-titled debut album, released in late 2010 on Captured Tracks, blew us away: a visceral collection of driving, icy-hearted post-punk derivations, its wailing synths, relentless tom-heavy rhythms and plaintively melodic basslines made no secret of their allegiance to Martin Hannett and Joy Division, Bauhaus, Savage Republic, early Cure, The Wake and Sisters of Mercy’s ‘Alice’. What made The Soft Moon more than a modern goth pastiche, though, was its manic, amphetamine energy, and the paranoid, psychedelic potential arising out of it: shades of Amon Duul ii,  Hawkwind, Can, 39 Clocks and the like. There’s nothing fey, nothing reserved or particularly introspective about The Soft Moon’s music: it’s a full-on rocket-ride into the heart of the California death-trip.

Vasquez returns this Monday, 31 October – that’s Halloween, kids – with a brand new EP, Total Decay, and it’s suitably terrifying, with even more of an industrial burnish than that of his previous work. The ‘Moon are still all about the droning, mantra-like grooves and howling, unintelligible vocals, but there’s an extra attention paid on this new EP to the percussion, which it just astonishingly vivid, and the bleak, black clouds of noise that surround and threaten to consume it.

For his FACT mix, our lil’ Halloween treat for you all, Vasquez has dug into his collection to share with you some nuggets from his collection. It’s interesting to see the mighty Chrome in there, as their electrifying, freeform acid punk has clearly impacted on The Soft Moon’s own sound; tellingly, they’re about the most famous band in the mix, with space given over largely to oneaway killers by culter-than-cult bands like 13th Chime, Cinema 90 and Sods.

Honestly, if you’re into goth, post-punk, cold wave, industrial – any morbid music of the night, in fact – you need to get your teeth into this; it’s a spotless, tip-top selection, and you can take that from people who really care about this stuff. Be sure to check out Total Decay when it drops via Captured Tracks on Monday, and have yourselves a grisly Halloween weekend.