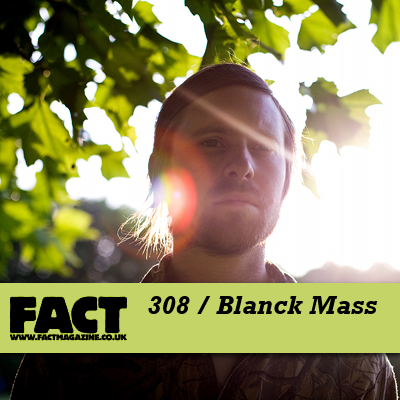 FACT mix 308 is by Benjamin John Power aka Blanck Mass.

Power is probably best known as one half of Fuck Buttons, but it’s with his Blanck Mass solo project that he’s most enchanted us. BM’s self-titled album, released on Mogwai’s Rock Action label, is an electronic odyssey partly inspired by the spiritually attuned cosmology of Carl Sagan. It’s tempting to describe the record as ambient, but that doesn’t really do justice to its impact or scale: Power paints on a huge canvas, and his towering, high-fidelity soundscapes might be sensuous, and beatless, but they’re designed to blow your mind rather than soothe it: Blanck Mass is musical science fiction at its purest, thrillingly evocative of planets turning, galaxies forming, suns burning and black holes consuming. Sagan would’ve loved it.

Having honoured the album in FACT’s 50 Best Albums of 2011, we asked Power to record a FACT mix, and he’s obliged, turning in what feels like a map of his influences as well as an engrossing listen in its own right. The focus seems to be on composers and producers who, like Blanck Mass, are responsible for music that’s reflective without being timid: witness the gripping holy minimalism of Popol Vuh and Arvo Part, the ascetic drone of Eleh, the barely suppressed violence of Prurient, Kevin Drumm, Burning Star Core and Tim Hecker.

Beyond that he’s favoured a diverse array of artists, be they old or new, dead or alive, who are each possessed of a singular creative vision – Raymond Scott, The Shadow Ring, Throbbing Gristle, Dennis Wilson, Moondog, Chris Watson and Yellow Swans to name but a few. It’s a mix that invites and rewards deep immersion, and is highly recommended.