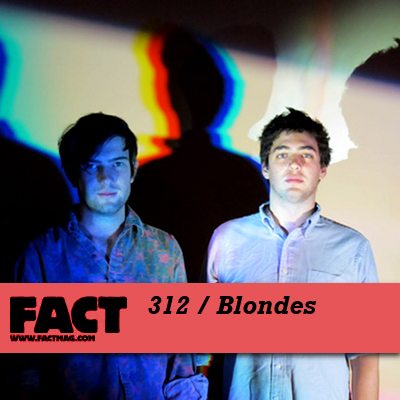 Soon to release their debut self-titled album on RVNG Intl. (February 6, to be precise), Blondes – the duo of Sam Haar and Zach Steinman – today present a supple, sensuous assemblage of house and techno that draws on their own formidable productions (including four unreleased numbers) and those of Ron Hardy, Sandwell District, Henning Baer, Levon Vincent, Wolfgang Voigt (Mike Ink), Peter Van Hoesen and Workshop’s Marvin Dash.

Steinman and Haar first met and began working on music together at Oberlin College in Ohio (also the alma mater of their friends and peers, Teengirl Fantasy), where they studied electroacoustic composition and studio art respectively. But it was during a stint living in Berlin that Blondes was born, and the project didn’t take off in earnest until the duo had settled in Brooklyn after that.

Since debuting in 2010 with the Touched EP on Merok, Blondes have been developing their sound – and conceptual clout – across a trilogy of trippy, effortlessly absorbing 12″s for New York’s RVNG Intl. (whose flagship FRKWYS series has featured the likes of Julianna Barwick, Excepter, Carter Tutti, Juan Atkins and James Ferraro) – according to label boss Matt Werth, an associate’s description of the Blondes experience as “Kompakt meets Silent Barn” resonated on “a micro-universal level”. Each of their RVNG 12″s houses “a pair of tracks that explore the concept of duality through a personal lens intensely focused on moving the body” – ‘Lover’/’Hater’, ‘Business’/’Pleasure’ and the forthcoming ‘Wine’/’Water’.

Their first full-length collects the six tracks from the 12″ series, and adds two more (‘Gold’ and ‘Amber’), plus a companion disc featuring remixes from the likes of Andy Stott, JD Twtich, John Roberts, Dungeon Acid, Rene Hell and Chicago house standard-bearer Traxx. It will be available on 2xCD and digital; the launch party on February 16 at London’s Shacklewell Arms (Blondes, Eaux, Rory Phillips) precedes a European tour (details to follow).