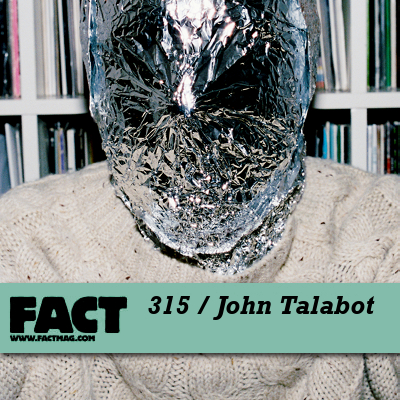 John Talabot sees in his debut album, ƒin, with a storming mix for FACT.

It’s hard to put a tag on John Talabot’s music. The Barcelona-based producer has released a steady stream of underground house records since 2009; they’re as deep as they come but they’re certainly not deep house, and despite all those gloriously uplifting riffs, there’s nothing big room about them. Often, they seem like pop records stretched to breaking point; each melody or key shift teased out for maximum dramatic effect. God knows really, but they murder a dancefloor.

Talabot’s released on a few labels in his time, Permanent Vacation, Young Turks and his own Hivern Discs imprint, but its to the former he’s turned to release ƒin, a remarkable debut album that takes the late night inner-city vibes of producers like Burial and Convextion but splashes gold paint over those midnight blues and greys. The result is one of the saddest, but also most inspiring records of 2012 so far.

Talabot’s FACT mix doesn’t feature much of his own material – though there’s a killer re-edit of Shakarchi & Stranéus at its centre-point – but there’s enough Beautiful Swimmers, Omar-S, Jus Ed and Blondes in that tracklist for you to know you’re in more than good hands. ƒin is out now.