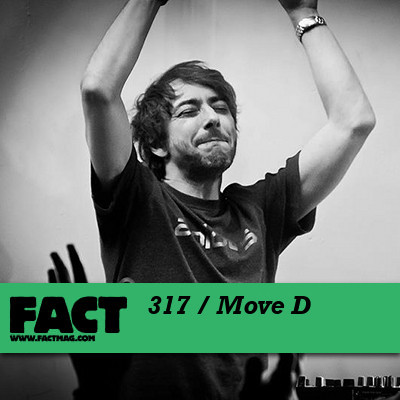 Since he first appeared on the scene in the mid-90s, David Moufang – to give him his real name – has proven to be a major force for good in house music, constantly seeking to evolve its grammar while at the same time honouring, and reinforcing, its most important traditions.

Before he began producing solo work seriously, Moufang teamed up with Jonah Sharp for a terrific album as Reagenz, and even before that was one half of Deep Space Network with Jonas Grosmann, with whom he also founded Source Records in 1992 – providing a home for important releases by the likes of Baby Ford, Sutekh, Alex Cortex and Lowtec. It was through Source that he eventually issued his own debut album as Move D in 1995 – almost 17 years later, Kunststoff is regarded as an ageless classic. The terrific, deconstructed electro 12″ ‘Cymbelin’ followed soon after on Warp, and then sporadic single transmissions on such esteemed labels as Compost and Plug Research.

As the 90s grew old, Moufang collaborated extensively with ambient techno godhead Pete Namlook, eventually releasing a new solo album through Namlook’s Fax +49-69/450464 imprint in 2005. Further collaborations and experimental outings came thick and fast, but by this time a whole new generation of house fans was becoming wise to D’s dancefloor-stirring talents, and he met the demand with a run of club-focussed 12″s and EPs on Modern Love, Liebe*Detail, Uzuri and Running Back.

The latterday Move D revival gathered steam with the success of Secrets Of The Beehive, his 2008 album collaboration with analogue nut Benjamin Brunn, and his regular presence on Workshop, the Lowtec-founded Berlin label whose finest releases constitute Germany’s most credible response to deep house since Ernestus and von Oswald’s Round series. As well as contributing solo to Workshop, Moufang also resurrected the Reagenz project for 2009’s Playtime album.

The Workshop crew are coming to London this Saturday, 25 February, for a party at Corsica Studios hosted by Phonica, Streets of Beige and Wavey Tones. Move D will of course be playing, as will Kassem Mosse, Lowtec and Even Tuell; Room 2 is headlined by Altered Natives. You can find more information and tickets here.

It’s about time that Move D did a FACT mix, wouldn’t you say? In fact, it’s long overdue. So without further ado, we give you an hour-long DJ session from your man, recorded live in Warsaw earlier this month and further proof, as if it was needed, of his talent and vitality.