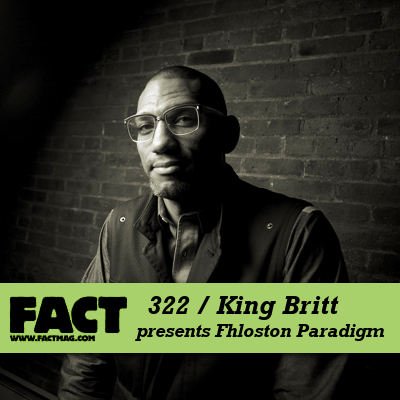 FACT mix 322 is by King Britt in his Fhloston Paradigm guise.

The King Britt Presents Fhloston Paradigm EP is released on Hyperdub this week. This project – which has evolved across three digital-only releases, Charlie Sleeps EP (2009), Fiction Science (2011) and After The Rave (2011)  – is an outlet for Britt to explore his fascination with the science fiction movies and TV series of his youth, creating imaginary soundtracks on entirely analogue gear – mainly Roland DR110, Korg Mono/Poly, Kork MS20, Roland JX3P, Moog Sonic 6 and SQ1 sequencer.

“This process forces me to think differently,” Britt recently told FACT, “much like when I started out in the 80s, about arrangement and rhythm. The sound is also all analogue which is what was used in all the science fiction films. So naturally the music leans toward that vibe.

“I mean as kids, we all loved sci-fi. Star Trek, Flash Gordon, Ultraman, Johnny Socko and then Star Wars changed the game. So it’s in our psyche, our DNA. When I play a Moog or any analog keyboard, I think automatically of those movies. It’s just in my genes!”

Philadelphia native Britt first troubled the world of electronic music in 1987, when he worked as singles/import buyer at his local Tower Records. While at Temple University he honed his DJ skills, taking up residencies at Philly’s Silky City and Revival in 1990, and also began producing music with his friend Josh Wink, leading to the release of ‘Tribal Confusion’ on Strictly Rhythm.

Britt toured with hip-hop collective Digable Planets, before co-founding – with Wink – Ovum Recordings in ’94. He quit Ovum in 2001, but remains responsible for some of its most important signings and releases, including a hit collaboration with Ursula Rucker, ‘Supernatural’, and some classic deep house-leaning 12″s under his Scuba alias. Adopting the name Sylk130, Britt created some of the most popular music of his career in the shape of neo-soul LP When The Funk Hits The Fan (1998), and was able to call upon such guests as Martin Fry, Alison Moyet, Grover Washington, Jr. and Kathy Sledge for the 2001 follow-up, Remember’s Only.

The spirit of collaboration persisted in Adventures In Lo Fi, which featured Madlib (as Quasimoto), De La Soul and more, and then Britt – always looking to reinvent himself while holding tightly to his roots – reworked a collection of a cappella voice and tambourine recordings made in the 1970s by Georgian preacher Sister Gertrude Morgan – the album, King Britt Presents: Sister Gertrude Morgan, was a great success, and sections of it have since been used in Michael Mann’s Miami Vice and HBO’s True Blood.

Recent years have showed no slowing of activity from the mind and studio of King Britt; quite the opposite. He’s reconnected with his love of techno with the Nova Dream Sequence and Dynamic projects, releasing through Compost and Carl Craig’s Planet E, and teamed up with multimedia artist and singer Rucyl to develop the Sun Ra-influenced improvisational performance group Saturn Never Sleeps. Which brings us to Fhloston Paradigm.

Kode9 – who has for some time been working various Britt productions into his DJ sets – has really picked a winner with this 12″. Its three gripping tracks cover techno of a truly epic sweep, Detroit-style beatdown and kosmische synth experimentation, and Britt’s intuitive command of rhythm mechanics, harmonic arrangement and solid gold hooks is in thrilling evidence throughout. He makes it all sound so simple, but the DNA of this music is incredibly complex.

The kaleidoscopic FACT mix 322 helps a little to map out that DNA. As well as a generous helping of Fhloston Paradigm’s own productions – including the marvellous ‘Chase’ from the Hyperdub EP – there are excerpts from the Logan’s Run and Blade Runner soundtracks, gravely romantic 80s balladry from David Sylvian and Eurhythmics (the show-stopping ‘Take Me To Your Heart’), Alice Coltrane-style astral jazz from Low Leaf, soaring techno from Galaxy 2 Galaxy (Underground Resistance), precious ambience from Ryuichi Sakamoto and Alva Noto, as well as plenty of unexpected surprises – like Tenko’s bewitching, Fred Frith and Arto Lindsay-featuring ‘Gradual Disappearance’. It’s all moulded together with an auteur’s refined sense of narrative and atmosphere, and we suspect that this is going to be one of those FACT mixes – like King Midas Sound’s or The Soft Moon’s – that becomes a permanent fixture in our lives.