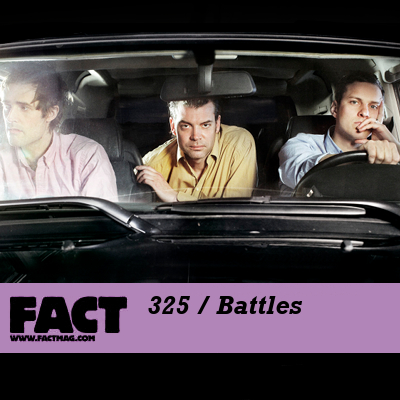 The trio of John Stanier, Ian Williams and Dave Konopka are currently at the height of their considerable powers. A lesser group might have capsized at the loss of a frontman as a visible and voluble as Tyondai Braxton, but the departure of that generously ‘fro’d fellow back in August 2010 instead precipitated a creative purple patch for the band, one which shows no sign of ending any time soon. Last year’s Gloss Drop album saw them at one reinforce their avant-garde credentials and open up their flanks to incorporate more pronounced influences from the realms of pop and dance music, with guest contributions from Gary Numan and Blonde Redhead’s Kazu Makino among others.

Today sees the release of Dross Glop, a spooneristic companion to their sophomore record featuring remixes of its tracks by some of the most interesting and innovative producers in electronic music. The remixes, which are being released in parallel across four separate 12″s, come from Kode9, Shabazz Palaces, EYE, Battles’ Warp stable-mates Hudson Mohawke and Gang Gang Dance, The Alchemist, Sandwell District operator Silent Servant, DFA’s Patrick Mahoney and Dennis McNany, Raster-Noton’s Kangding Ray, Qluster (the latest incarnation of Hans-Joachim Roedelius’s Cluster) and Kompakt techno softies Gui Boratto and The Field. It’s what you might call a who’s-who.

To mark the release of Dross Glop, and to herald Battles’ live appearance at Belgium’s Dour festival, which takes place on July 12-15, we invited Battles to record a little something for our FACT mix series. John Stanier stepped up, and has turned out a tasty selection of the kind of tunes the band have been devouring of late, focussing primarily on artists who appear as remixers on Dross Glop; intriguingly, it features no less than three previously unreleased tracks by Hud Mo. Full tracklist is below; download via the Soundcloud player.

Battles’ Dross Glop is out now on Warp Records. For more information and to buy your copy, click here.