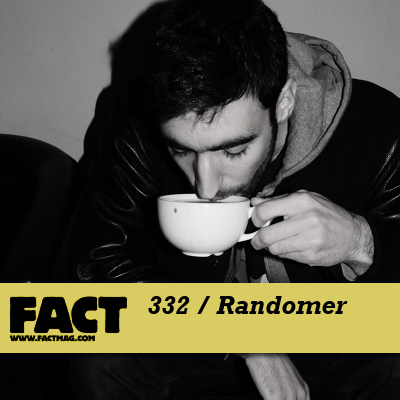 It’s the Queen’s Diamond Jubilee, and what better way to see it in that with a roughneck session from one of Britain’s most uncompromising acts?

Rohan Walder’s been kicking around for a few years now, releasing on Tru Thoughts and Super, and contributing to Hessle Audio’s 116 & Rising compilation. It was late last year however, following that Hessle release that Walder really seemed to step things up: ‘Real Talk’, his single for Numbers showed off his skill at drum programming, with sand-blasted kicks and snares that seemed to collapse into each other, but the one that really got us was ‘Scruff Box’. Released on Hemlock earlier this year, it took things fully darkside – and not in a cliched Reese bassline and rasta samples way. This was proper scary, haunting music – with drums falling over each other for room, and fucked-up samples trickling into the space between them.

Randomer’s clearly got no time for compromise, and his FACT mix only deals in the most powerful dancefloor fare: whether that’s high-octane grime (Alias, Jon E Cash), dubstep (Mala), electro (Alden Tyrell, Mr. Oizo), breaks-heavy hip-hop and club (2 Live Crew, Rod Lee) or simply The Prodigy and Blazin Squad, everything here is designed to make you move. And if you’re not interested in that, don’t come to us crying when you’re the only one not having fun.