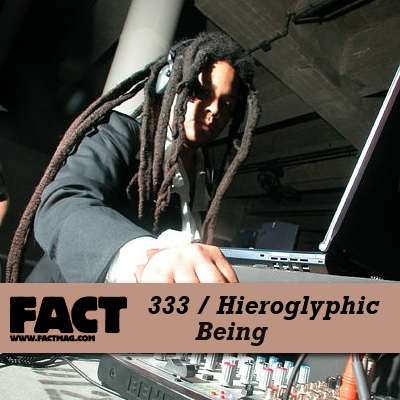 FACT mix 333 is by Jamal Moss – aka Hieroglyphic Being.

After years as a shadowy but palpable presence felt on the periphery of contemporary house music, Chicagoan Moss has of late, gained something approaching the wider recognition he deserves. It’s rare, in the aesthetically standardised and risk averse world of dance music “culture”, to encounter someone with such an idiosyncratic and uncompromising approach to their art – as producer (recording not only as Jamal Moss and Hieroglyphic Being, but also under other aliases such as I.B.M., IAMTHATIAM and The Sun God), DJ and proprietor of Mathematics Recordings, Moss has carved out a redoubtable reputation, wise enough to guard important traditions even as he’s restlessly seeking out new ground, eager to challenge himself and his audience.

Moss declares himself as “one of the last of the line of producers directly influenced by Ron Hardy at the Music Box”, and the founding spirit of Chicago house is in his bones. After cutting his teeth creating “industrial soundscapes” for the Liquid Love parties at Chi-town’s legendary Powerplant in ’89-’90, Moss took up an influential radio slot on 89.3 WNUR and co-founded Liquid Sex, attracting many local big names to the decks, and further enhancing his own reputation as a young man of rare talent, taste and integrity. He was taken under the wing of acid legend Adonis, and had some success as part of the  Chicago Bad Boys and Dirty Criminals collectives, before deciding to focus his energies on his own music and his own label: so Hieroglyphic Being, and Mathematics Recordings, were born.

The rest, as they say, is history. Mathematics has gone from strength to strength, providing not just a platform for Moss’s productions, but those too of garlanded Chicago legends like Adonis, Lil’ Louis and Steve Poindexter, as well as fresh young talents like Marcello Nepolitano and the UK’s own John Heckle. Meanwhile his own productivity as a recording artist is quite astonishing – encompassing a bewildering number of self-released CD-Rs as well as 12″s and LPs on labels like Alter, Soul Jazz, Further, Créme Organization, Spectral Sound and of course Mathematics and its subsidiaries.

Like his formative hero Ron Hardy, Moss looks far and wide in search of sounds to stimulate mind and body. The astral jazz of the late Sun Ra has obviously had a profound impact on him, most obviously manifested on last year’s deep, exploratory Les Jardin Des Chemins Bifurqants LP, but Moss also drinks deep on psychedelia, EBM, disco, electronic pop, industrial, free music, modern clasical and noise. His is a world where Laurie Anderson and Liaisons Dangereuses lock horns with Thelonius Monk and John Cage, where Nitzer Ebb and Front 242 trade whipcracks with Cerrone and Chic. Across his work as a label-owner, producer and DJ, Moss acts a a lightning rod for virtually everything interesting and enervating that’s happened in the last 60 years of music.

It was never going to make sense for us to host a studio mix from Hieroglyphic Being, for when it comes to Jamal Moss, live is undoubtedly where the magic happens, where his powers – as selector, as mixologist, as spiritual conduit and as iconoclast – are most strongly evident. Jennifer Lucy Allen, blogging recently for The Wire, described his performance style as “loose, sloppy and incredibly ugly in some parts, but always giddy, impatient and unpredictable”, praising his ability to “[capsize] all the clichés that have built up around our idea of what makes a ‘good’ DJ set, i.e. that good mixing is a smooth segue between two tracks; that a set should move through styles in a gradual progression; that BPMs shouldn’t ramp up, plummet and shoot up again in the space of three minutes.”

FACT mix 333 is a similarly giddy, similarly cliché-capsizing outing from Moss. Recorded on March 15, 2012, at the Musicbox club in Lisbon, it captures Moss across 2 hours and 45 minutes of live PA performance, vinyl DJing and editing on the fly. It’s by some distance the longest FACT mix we’ve ever hosted, but we couldn’t bring ourselves to edit it down: Moss’s exhilarating narrative, at times improvised and free-associating, at others coolly controlled, simply demands to be consumed as a whole.

There is, almost needless to say, no tracklist. Just strap in and enjoy the ride.